Their martyrdom inspires the sacrifice of missioners. 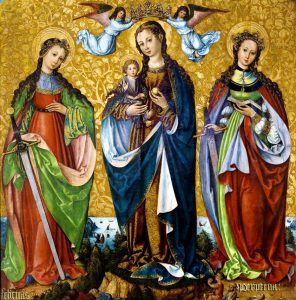 “Mary and Child with Saints Felicity and Perpetua (Sacred Conversation),” or the “Sacra Conversazione,” is an anonymous painting from Greater Poland. (Public Domain/WIKIMEDIA COMMONS)

Their names may be familiar because they’re mentioned often at Mass (Eucharistic Prayer I) and always in the Litany of the Saints that we sing at Baptisms and the Easter Vigil. Sts. Perpetua and Felicity were two young women who were killed by political authorities in Carthage, Africa (modern-day Tunisia). Refusing to renounce their faith, they gave their all. Perpetua had kept a diary, a timeless witness, in the days leading to their death.

Perpetua, 22, was a daughter of wealth, a new mother, who was called by God to become Christian, in spite of its illegality. Her slave, Felicity, joined her as a catechumen. They and others were arrested and scheduled for execution. Their teacher, Saturus, voluntarily joined them in an act of solidarity. Their crime was no other than refusing to renounce their Christian faith. Both were baptized while awaiting death. They were brought into the arena on the appointed day and beaten, then beheaded as a crowd cheered. Other Christians with them were mauled, killed and eaten by beasts.

Some missioners, such as Blessed Father Stanley Rother and Sister Dorothy Stang in our own day, and many others, are murdered for their faith. Most missioners, though, live a life of simple sacrifice: they leave their homes, families and comforts behind as they go forth to spread the Good News. But the fruit of their sacrifice is the joy of seeing the faith grow. The blood of the martyrs is the seed of the Church, goes Tertullian’s ancient saying. Modern missioners plant that seed through their lives of sacrifice.