“The Missioner must be prepared for everything: for joy and sadness, for life and death, for embrace and abandonment, and I am ready for it all.” 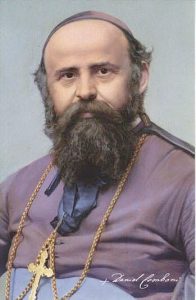 How many missioners start from humble beginnings! St. Daniel Comboni grew up in a gardener’s household in the mountainous north of modern-day Italy, the fourth of eight children. He was the only one to survive into adulthood.

By young adulthood he had learned French, English and Arabic at a religious school in a nearby city, Verona. Having been moved by stories of the 16th and 17th century Japanese martyrs, he set sights on becoming an overseas missioner. His dream came true in 1857 when he and his friends, now ordained, departed for Africa.

Missioners strive always to respect local culture, but the best aren’t afraid to confront injustice when they encounter it. In Sudan, where St. Daniel and companions were received, the slave trade was in full tilt. St. Daniel’s assignment was liberation of enslaved boys and girls.

Returning to Italy to heal from malaria, and staying for several years, he met with Pope Pius IX. There he pitched a unified mission plan for evangelizing central Africa, one built on teaching Africans to evangelize Africans. It was a revolutionary idea at the time. The pope agreed, and sent Daniel to implement the plan. He established a religious community for men, and another for women, to make it happen. He was made a bishop in 1877. Today there are Comboni Missionaries, men and women, in 42 countries.

Part of his plan was to develop support outside of Africa, so he created a magazine to animate mission awareness—the first mission magazine in Italy. Before dying of cholera in Khartoum, Sudan, he said, “I am dying, but my work will not die.” He was a missioner till the end.