A deep spirituality led to mission. 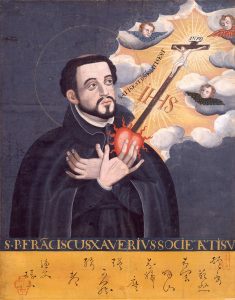 He’s one of two official patrons of missioners (the other is St. Therese of Lisieux). Francis Xavier, from modern-day Spain, was the first of a group, the companions, who gathered around St. Ignatius Loyola to eventually found the Jesuits. These all were sons of wealth who felt a calling to follow the Lord in the deepest way. For St. Francis, that eventually would mean death a half-world away from home. But, at the beginning, he was rich kid who regarded Ignatius, a roommate, as a fool for his religious aspirations.

As his relationship with Ignatius deepened, he discovered his calling to become a priest, and then a missioner. Ignatius, of course, would formalize his approach with Francis in a method of spiritual direction, the “Examen of Consciousness,” that is popular worldwide to this day.

Francis would set off soon to lands unknown to Christianity, mostly in Asia, from India all the way to Japan. Most people where he lived certainly were religious already, but St. Francis Xavier brought to them the fullness of God’s revelation in Christ. He left a trail of Churches in some countries where he lived—his reputed to have baptized the most people since St. Paul—yet in others he was stifled.

A deep spirituality, nurtured by his fellow Jesuits and his encounter with the people of Asia, was at the heart of his passion to spread the Good News. That openness to God left a legacy for all Christians.

Prayer/Reflection
St. Francis, the spirit of faith impelled your work as a missioner. Inspire us to open our hearts and listen to the deepest callings of the Lord. Then, let us imitate you as we share the Gospel where the Lord leads us.