This pioneering sister served the dying. 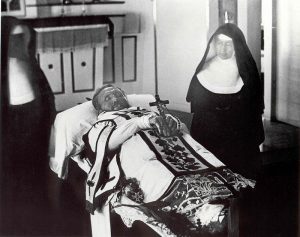 Mother Marianne Cope with St. Damien of Molokai at his funeral.

Today’s isn’t the first immigration crisis in the United States. In the late 1800s St. Marianne Cope, a Franciscan Sister, lived in a city of immigrants: Syracuse, New York. She and her sisters started two hospitals there that welcomed and respected the rights of everyone. Other hospitals followed nearby, but Mother Marianne, skillful administrator, heard a far-off calling, this in a cry for help from a mission priest.

In 1883 she and 6 of her sisters left New York, for good, on a trip for across the United States, first by train, then by ship, to what we know now as Hawaii. They brought their administrative and nursing skills to serve people with leprosy, what we now call Hansen’s Disease, following in the footsteps of St. Damien de Veuster.

At the invitation of Hawaii’s king and queen, when they arrived the sisters served at an Oahu hospital that gathered lepers from throughout the kingdom. Then they established St. Anthony school, and after that a home to care for the healthy children of exiled lepers.

In 1888 they moved to Father Damien’s leper colony on Molokai Island. Mother Marianne and her sisters went about serving the sick and dying at a girl’s home. They tended to the Father Damien as he himself died of leprosy.

Thousands of people died on that island over the years, but none of the sisters did. Mother Marianne had established strict, successful sanitation practices.

Hers is a witness of brave self-sacrifice and optimism combined with skill, common sense and a serene trust in God. Those are good traits for any missioner.

Prayer/Reflection:
Mother Marianne, you showed how we can combine skill and optimism to serve happily in the hardest of situations. Inspire us to leave fear behind and to reach out, in welcome, to the neediest among us.