She was a beacon of hope for immigrants. 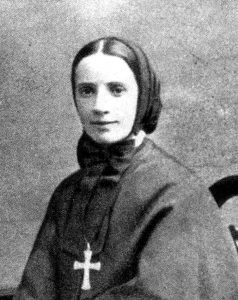 Mother Frances Cabrini got off the ship in New York City and immersed herself into the chaotic world of poor immigrants. Born and raised in Italy, she had dreamt as a young girl of becoming a missioner, and made up her mind to join a religious order.

Young Maria Francesca was not in great health, and thus was rejected by the order who taught in her schools. But people with a missioner’s heart are not easily turned away. At age 30, she and seven other women founded the Missionary Sisters of the Sacred Heart of Jesus. They had hoped to go to China, but Pope Leo XIII saw the United States in great need of missionaries, as immigrants poured in, seeking work and opportunity in the rapidly growing nation.

Education was a great need to help stabilize families living in poverty. She organized education and catechism classes. Over the years she established orphanages, schools and hospitals.

She was so successful, determined and motivating that soon she was getting requests from elsewhere, even worldwide. She traveled to Europe, South America, and across the United States, settling in Chicago, where she established hospitals, and a farm to feed fresh food to the patients.

Remarkably, this woman who was rejected by the order which founded her own school went on, herself, to establish 67 schools, hospitals and orphanages, helping shape America’s healthcare system.

Mother Cabrini, pray for us that we may see the needs of immigrant families and do what we can to help them. Inspire missionary spirit in us that we might see possibilities where others see obstacles.