He arrived in New York City with one suit of clothes and a dollar in his pocket, goes the story. 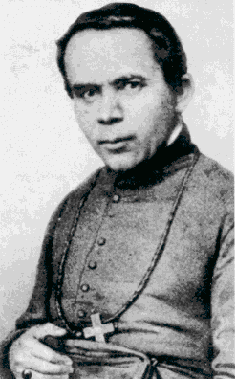 He was 25 years old and fluent in six languages; his dream was to become a missioner. A Bohemian by birth, John Neumann was ordained a New York diocesan priest, then later joined the Redemptorist Order. He went on to become a bishop, founded the first Catholic school system in the United States, and 150 years later, was canonized as the first male U.S.-citizen saint.

Not long after his 1836 ordination, Father John was sent across the Allegheny mountains to Buffalo, where there was one priest serving the city and none in the surrounding countryside. Father John went to the outlying areas. Indeed, he is one of America’s early home missioners.

The enormous parish he worked in had 400 isolated families, generally in poverty, living on farms across a half-million-acre forest stretching from Lake Ontario to Pennsylvania. He traveled to the few villages in his parish boundaries by horseback or walking, stopping at farms along the way. He might travel 50 miles to celebrate Mass. He carried an altar stone and other priestly implements on his back. A short man, his feet couldn’t reach the stirrups, a cause of no small ridicule. He lived intentional poverty, insisting, “Only a poor priest, or one who can endure the hardships of poverty, can labor here with fruit.”

Years later he became bishop of Philadelphia, Pennsylvania; but even then he was an unpopular person, maybe because there was much anti-Catholicism in his day as well as prejudice against Bohemians. Maybe he was too short, or embarrassingly too austere. Yet he persisted. In eight years he grew the Philadelphia Catholic school system from two to one hundred schools! He oversaw construction of one church per month to serve a booming immigrant population. He wrote two catechisms. He was a missioner, both urban and rural.

St. John died of a heart attack on a Philadelphia street, while running his own errands, at age 48.

Prayer/reflection:
Pray for us, St. John, as we go about the missionary tasks of our days. Let us move freely to new places, meeting new people, to bring God’s saving Word to those thirsting for truth. Pray that we can remember, and share, the poverty of Christ.