If tenacity is a trait of a missioner, Mother Philippine had it in spades. 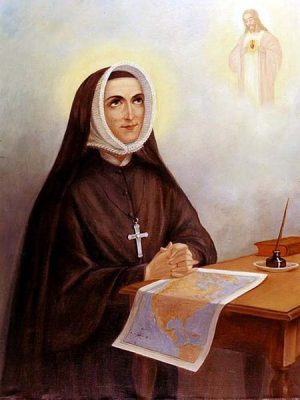 St. Rose Philippine was a child of French nobility and of the French Revolution, a difficult combination. A young Visitation sister at the time of the revolution, her convent was closed. After an 11-year ordeal, refusing to abandon her religious lifestyle, she helped found the Society of the Sacred Heart in Grenoble, France.

St. Philippine longed to serve as a missioner in the New World, but had to wait 13 years before she had a chance. She and four other Sacred Heart sisters took the arduous journey by sea to New Orleans, Louisiana, in 1818. Six months later they headed upriver by steamboat to St. Louis.

She and her sisters were welcomed to St. Louis, then promptly sent by the bishop to the small village of St. Charles, Missouri. Year later she described it as, “the remotest village in the U.S.” She didn’t miss a beat, though, setting up the first Sacred Heart school outside of Europe, which also was the first free school west of the Mississippi River. The school soon moved to a more viable location, where she set up a novitiate for new sisters. Eventually Mother Philippine found herself back in St. Louis, where she founded an orphanage, and another school.

In her 70s she served a short stint among Native Americans in Sugar Creek, Kansas, founding a school for Potawatomi girls.

All told, St. Philippine spent 34 years on the American frontier not only as a pioneering educator, but also, literally, as a pioneer. “There are no difficulties except for those who worry too much about tomorrow,” she said. That’s missioner spirit.