He gave everything for his faith. 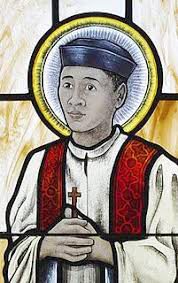 How many times we see in missioner saints those who gave away a lifestyle of comfort, even wealth, to go forth and spread the Gospel! St. Vicente lived in modern-day Vietnam, then known as Tonkin. Born to Christian parents, members of the nobility, as he became educated he felt a call to the priesthood and joined the Dominicans.

After lengthy study abroad in the Philippines, St. Vicente was ordained, then sent, with other Dominicans to evangelize among the rural Tonkinese people. His efforts to introduce Christianity, a banned religion, were not welcomed by local authorities. They had St. Vicente and his companion, a Spaniard and Dominican friar St. Jacinto Castenada, beaten, then taken by foot, carrying a yoke identifying them as Christian, to a regional center of government, and eventually to a place where the king of Tonkin held court.

While under detention, he and St. Castaneda continued to preach their Christian, Catholic faith. They participated in a three-day debate about Confucianism, Taoism, Buddhism and Catholicism, recorded as The Council of the Four Religions. Eventually they were tried before the king of Tonkin, who became enraged at their persistence. They were given the death sentence, and were soon slain by sword. His devotion to Christianity held a deeper value to St. Vicente than earthly life itself—he insisted on being martyred when it was suggested that he should be spared, since he was Tonkinese. He and St. Castaneda are revered today as Vietnamese Martyrs.

Prayer/reflection:
Lord, thankfully you call only a few to be martyrs for our faith. Help us to be inspired by the martyrdom of the missioner saints to suffer our own pain, awkwardness, and discomfort in spreading the Good News.