He found the face of Christ in the poor. 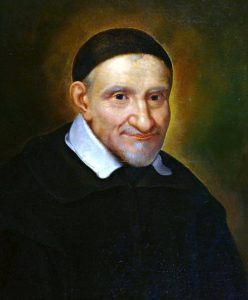 You might think of St. Vincent de Paul as the founder of the worldwide society that bears his name. Not true. That was one of his followers, Blessed Frederic Ozanam, a century later.

St. Vincent started in poverty, a peasant, and probably got his name from a nearby stream named Paul, in the French countryside. He raised oxen. He was very smart so his father sent him to seminary, where he intended to establish a steady income for his family. There he earned his seminary tuition by tutoring children.

On a mission for a wealthy client, he was captured by marauders and sold into slavery. He lived for two years as a slave. Details are disputed, but he escaped back to Rome, then ultimately returned, now well-educated, to France. He found himself at the service of the royal class.

It was when he returned to the countryside to preach a mission that his heart turned toward the poor. One of his wealthy friends then donated funds for him to operate a band of rural missioners in the countryside near Paris. He founded the Daughters of Charity, whose first members were from the aristocratic circle of women he served. He introduced them to families in poverty, and organized mission-support groups among his wealthy friends.

He was a chaplain to imprisoned slaves in Paris, and eventually founded a men’s religious order, now known as the Vincentians, devoted, initially at least, entirely to the rural missions.

Prayer/reflection:
St. Vincent, inspire in us a love for the poor, and the willingness to step outside of our comfort zones to serve them. Help us to see the face of Christ when we see the faces of those living in poverty. Embolden us to reach out and help.