“Open your houses to help the poor.” 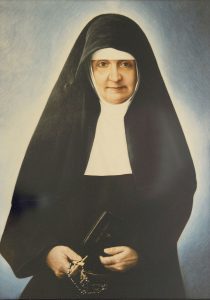 Missioners almost always have to make do where there is little familiar to work with. St. Mary Bernard is no exception. This Swiss woman found herself in Ecuador, in a rural place with no sacramental ministers, and no hope of any soon, and was challenged to bring the Gospel to a people who were, in a way, “thirsting for the truth.” The fruit of her labor was documented by the Holy See, during her canonization: “the Christian life of her people blossomed again as if by magic.”

Maria was born in the Swiss countryside in 1848, and spent her youth farming, “educated in the love of God and neighbor.” During her youth she developed a tremendous devotion to the Eucharist, one that would open her heart and fuel her faith for the rest of her life.

She become a Catholic sister, then returned to her farm, only to return to another community, a Franciscan one. But, with a heart typical of any missioner, she felt called to “go the periphery,” as Pope Francis puts it, “to work in the field hospital.”

After serving for years as a leader in her community, she was invited by a bishop in Ecuador to bring sisters to proclaim the gospel in a remote region.  She got permission, then was assigned a mission team, to head to a remote region in Ecuador. Over many years she served the poor in various ways and in different South American countries, founding a congregation of sisters to join her work. Her hallmark was enculturation, that is, adopting the sharing of faith to the language, customs and lifestyle of the local people.

Prayer
St. Mary, you show us in a missioner’s heart a desire to serve the poor in a humble way, one that respects people’s culture and self-worth. Help us to, like you, live the grace of love poured out in the Eucharist, and bring that love in the most sensitive way, to the people around us.