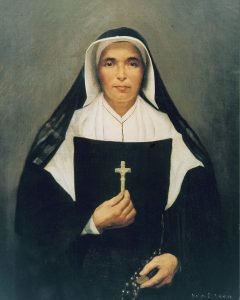 Though not as well-known as other American missioner saints, St. Mother Théodore Guérin was remarkable. Her hallmark virtue is trust in providence, the protective care of God.

It was not uncommon in the 1800s for U.S. bishops to recruit European religious to come assist the fledgling Church in the New World. When the Bishop of Vincennes, Indiana, put out a request for sisters to come help with Catholic immigrants, Sister Théodore was chosen by the Sisters of Providence to lead five other sisters to Indiana.

What today would be a long day’s travel was three rough months for now-Mother Théodore and sisters. When they arrived in St. Mary of the Woods, Indiana, in 1840, nothing was there! The sisters stayed with families nearby as construction started on “The Academy,” 65 country miles south of the bishop who had invited them. She is now known as the foundress of the Sisters of Providence of Saint Mary-of-the-Woods.

During her congregation-founding career she was heroic in her opposition to the anti-Catholicism of the day, and even from persecution by her own bishop, who excommunicated her over a policy disagreement! His successor lifted the excommunication. Cardinal James Gibbons, Archbishop of Baltimore decades later, said she was a “woman of uncommon valor,” and a “religious athlete.”

That first academy was followed by others. The sisters eventually were staffing schools across Indiana, as well as orphanages and free pharmacies for the poor. As the community grew, their educational mission and what followed spread across the United States and beyond.

Today, more than 250 Sisters of Providence minister in the United States and in Taiwan.

St. Théodore, pray for us that we might be brave in the face of obstacles, that we might better learn to trust in God’s Providence. When life presents us with hardships, let us trust that God has bigger and better plans for us.