He stepped out bravely in compassion. 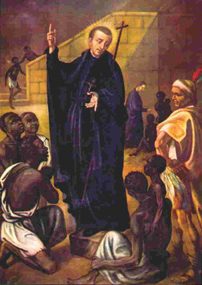 Slavery was new to Europeans in the 16th century, and Peter Claver was horrified by it. He was born 70 years after Spanish King Ferdinand’s purchase of 250 slaves for New World colonies. As everyone knows, the slave population in the New World grew and grew, not only from agriculture but also as Europeans forced slaves to mine gold that financed Europe’s rebirth in the Renaissance.

Peter had joined the Jesuits as a young adult, and eventually heard a calling to the New World missions. He wound up in a Cartagena, Colombia. He saw the slave industry firsthand and was repulsed. Claver’s mentor, Father Alonso de Sandoval, S.J., had been in active ministry serving the Africans for decades. Peter decided early to a lifelong ministry among the slaves.

Much like missioners today who help desperate Central American refugees upon arrival at the southern border of the United States, St. Peter made it his business to board the arriving slave vessels on the wharfs of Cartagena and provide food and medicine to the slaves who had been carted, like animals, in the ships’ hold.

It is estimated that over 40 years he personally served and catechized, and baptized, 300,000 slaves. When he went out to the plantations he insisted on sleeping among the slaves rather than the in the slaveholders’ quarters.

Unpopular as he was to many in life, in death he was embraced as a hero. Many Catholic organizations are named for St. Peter Claver, and in Colombia, his feast day is observed as the Human Rights national day.

St. Peter, you showed us passion for the needs of others, even those most feared and despised by society. Inspire in us a sense of compassion, and the fortitude to stand in solidarity with people oppressed.