“Listen and let it penetrate your heart…” 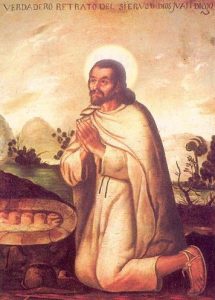 You often see paintings of this 16th century Mexican saint with a walking stick heading down a mountain path. He was out walking in the countryside, between villages, when he encountered a vision of the Blessed Virgin Mary. Why him, why then? His persistence transformed the deeply challenged mission of the Spaniards.

St. Juan Diego was an Aztec man, an adult when six Franciscan missioners came to Mexico City in 1524. They were part of a military suppression of Aztec governance and structure. Outside of a small number, Aztec conversions were few. St. Juan Diego was on his way into town one day when the Virgin Mary made one of four appearances to him. Tradition has it that her appearance was in the form of an Aztec woman, one who asked to be called Guadalupe, a name familiar to the Spaniards.

St. Juan Diego reported his experience to the Catholic bishop, who discounted it. On his fourth attempt, when he brought out-of-season roses to the bishop, and his tilma bore the image of the Blessed Mother, the bishop fell to his knees, convinced. It was St. Juan Diego’s (and Our Lady’s) perseverance that broke through the resistance, in a form of “reverse mission.”

The hill where the apparitions took place, Tepeyac, had been revered as the site of an Aztec goddess. After Mary appeared there, and the Christians took that seriously, widespread conversion to Christianity took place. As had happened in so many missions worldwide, the Church took the nature of local religions and fulfilled them in Christianity. St. Juan Diego, in his devotion to our Lady of Guadalupe, was a mediator in that mission, both to conquerors and to the conquered.

He did so with the encouragement of the Blessed Virgin, who told him, “Listen and let it penetrate your heart…do not be troubled or weighed down with grief. Am I not here, I, who am your Mother?”

St. Juan Diego, you show us what it means to be both open and persistent. Pray that we will listen when God is speaking to us through God’s many ways. Pray that we will have the courage and patience to share that Good News with others.