“The harvest comes because of the grain that dies.” 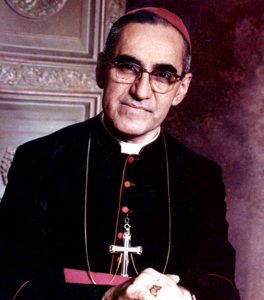 “His ministry was distinguished by his particular attention to the poor and marginalized.” Those words from Pope Francis, at the 2018 canonization of St. Romero, summed up the blossoming of this simple bishops’ life. Born into large family, Oscar Romero grew up well-fed, if humble. His home had no running water or electricity; the children slept on the floor. He was trained to be a carpenter but had both the desire to be a priest and the intellect to thrive at seminary.

His priestly career led him eventually to become auxiliary bishop in San Salvador, the capital of El Salvador, in Central America, then bishop in Santiago de Maria. It was there he saw the depths of poverty among the local people and did everything he could to help. But he knew that the system that was impoverishing these people must change.

He became archbishop of San Salvador as the nation was declining into civil war. Witnessing poor people being slaughtered by the military—3,000 per month in 1979—hardened his resolve to speak out. He used radio over his career to broadcast his preaching. Now he had become a threat to the military, imploring the government on the air to “stop the repression!” He was gunned down soon thereafter, while leading Mass at a convent. In his homily at that Mass he had preached, “Those who surrender to the service of the poor through love of Christ will live like the grain of wheat that dies.”

Prayer/reflection:
St. Oscar Romero, teach us by your example to stand boldly for the truth, even when it is a truth that the powerful don’t want to hear. Let us learn from you how to listen to the poor around us, and to follow the Lord’s call to act in compassion and solidarity.