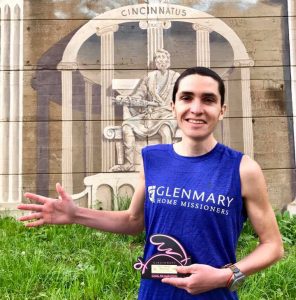 CINCINNATI — Glenmary Novice Antonio Marchi ran his best time ever, leaving 2,972 runners behind as he won first place in the 2019 Flying Pig Marathon Tri-State Running Co. 5K race on Saturday, May 4. He ran the 3.1 mile distance in 15 minutes, 14 seconds, a personal best time at that distance for the long-time runner.

“I practiced running near Glenmary headquarters in Route 4 in Fairfield, up and down the hills, conditioning myself over many months,” said the former physical education teacher. He also was part of the Glenmary relay team that placed third in a field of 252 teams, running a total of 26.2 miles in about 3 hours. About 30 Glenmarians, coworkers and friends ran or walked in the 5K or other events in a weekend that has become a national draw for marathon runners.

Glenmary participated in the 2019 event to build awareness for mission vocations and to raise funds for mission work.

In Sunday’s race the team of Glenmary students Marchi and Josiah Kimani, along with coworkers Wilmar Zabala (vocation counselor) and Rachel Wamsley (assistant development director), competed as a relay team.

“As I ran past the thousands of people who lined the entire 26 mile route, once in a while someone would shout, ‘Go Glenmary,’” Wamsley said. “I feel as if we were introducing people to our Home Mission effort.” Glenmary runners’ wore shirts prominently promoting the home mission cause. 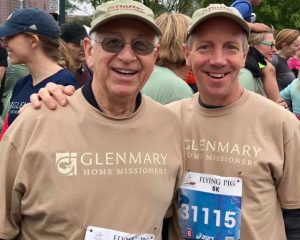 Glenmary’s Father Chet Artysiewicz and Brother David Henley were among those who walked in the 5k to raise awareness for mission vocations.

The race events were preceded by an “adopt a pig” program; whereby Glenmary staff and friends competed for the greatest number of $5 contributions. Through these efforts Glenmary raised $5,000 for the home mission cause.

The evening before the races began the Development Office hosted a gathering of about 50 supporters who celebrated Mass at Our Lady of the Fields Chapel, then enjoyed a potluck dinner and good company.

Last year was Glenmary’s first as a registered charity partner of the Flying Pig. The relay team took home first place in 2018.

“It was a real community builder,” said Glenmary president Father Chet Artysiewicz. That’s what Glenmary is all about.