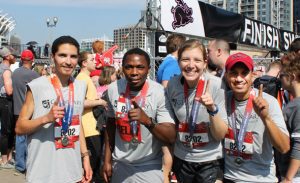 Creative development ideas, including a Facebook fundraiser and a special dinner, brought in more than $3,000 for Glenmary’s effort to seek men called to missionary priesthood and brotherhood.

Josiah Kimani, Antonio Marchi, Rachel Thome and Wilmar Zabala completed the 26.2 mile course in 3:06:29, coming in first of 303 teams in their division. Josiah and Antonio are Glenmary men in formation, both preparing for to be Glenmary brothers. Rachel works in Glenmary’s mission education and ministry office and Wilmar is Glenmary’s vocations counselor.

“Last year I ran the half-marathon at the Flying Pig and saw how huge an event it was,” Wilmar said. “Right then I thought it would be a great idea to have a relay team and run it to bring awareness to Glenmary’s ministry in rural America since it’s not known to many. I also thought of a relay team because I know we have talented Glenmary students and seminarians who love running. I want to acknowledge and uplift their athletic abilities.”

Many organizations use the Flying Pig as a fundraiser and awareness tool. Now in its 20thyear, the event has grown to a multi-day affair with nearly 40,000 participants. Glenmary graphic designer Cassie Magnotta designed special shirts for Team Glenmary to wear while running and planned the dinner event the night before the race, which included Mass at Our Lady of the Fields chapel.

The runners did the rest. 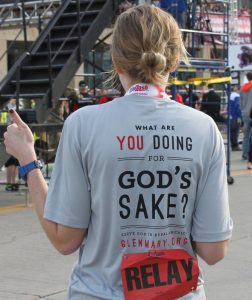 “One benefi of participating in the Flying Pig is certainly the visibility. It’s important to have a presence in big local events,” Wilmar said. “Most importantly, by having the two men in formation on the team, I hope to show and remind young people who may be thinking about the priesthood or religious life that they don’t have to give up their athletic abilities when they say yes to God’s calling. I’ve been praying that one or two of the many young people who saw and read our running t-shirt would be inspired to check out our website!”