Home / News and Notes / What is a calling? Father Wil Steinbacher

What is a calling? Father Wil Steinbacher 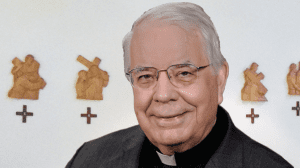 One thing that Father Wil Steinbacher has learned over a lifetime of service is that God calls each of us. He has served as mission pastor, director of Glenmary Research Center, the society’s vice president, and, most recently, as minister to men on death row in a Tennessee prison.

Q: How does a person know that he or she is called? What does a calling look like?
A: First of all, it’s a response of faith that convinces me that the call is there. The graces that I’ve had over a time of faithfulness to the call tells me that it’s there.

Q: Just what is a calling, to you?
A: It’s the call to follow Christ, and to carry that message to others. The call is to all that Glenmary does in trying to bring the Church to people in rural America. So, it’s a combination of things, but really it’s one thing: the Spirit of God, calling. I learned that years ago in novitiate, when I prayed to know whether Glenmary was really what I wanted, and it’s a great grace that has stayed with me for my entire life, for 86 years!

Q: How does that work?
A: Well, I have to look at Scripture and see how Jesus called the men around him to do what he was going to be able to do after a while. The call for them was the same as it is for me. It is following Christ as much as possible, with that grace that I receive. It is really God reaching out to me. That, I’ve found, is what gives me energy.

Q: So how do you know that call is for you, and not just a kind of generic call for anyone?
A: Now that’s what you have to discern, asking yourself, “Is this what I really want?” I remember when it came to take the oath of celibacy, the thought came to me, If you don’t want this, run away, because it’s not for you! I didn’t run.

Q: I guess that call changes over time?
A: I’ve had a lot of experiences in Glenmary. When I was at the research center, it was different from when I was personnel director. And it was different when I visited prisoners. For example, in some cases as personnel director I was helping the men to understand themselves better, maybe even through testing, or shared prayer. That was my way of communicating love to them. It is a gospel calling. I drove thousands of miles doing that across Texas, Oklahoma, Arkansas, Georgia, Mississippi, Alabama…. I was responding to my calling, and the work helped me to see what my calling is. God is present in forming community.

Q: You have a particular devotion to Stations of the Cross, I hear.
A: I don’t mean to focus on suffering, but I do think the cross helps us to understand who God wants us to be. Lots of difficult things happen to us. As we understand the Cross, I refine my sense of who I am and how the Spirit is working within me. I know it’s unusual, but I pray the Stations of the Cross daily. Even as he carried the Cross, Jesus never lost the sense something bigger was coming. What he was bringing was the resurrection. I guess that’s how I can have a sense of humor, too!