Home / News and Notes / A New church in Grainger County

A New church in Grainger County

St. John Paul II mission parish gathers at the construction site of their new church, which is being built with volunteer labor. The parish hopes to be worshipping in the new space by Christmas.

“It depends on the volunteers.” That’s Glenmary Father Neil Pezzulo, pastor of St. John Paul II parish in Grainger County, Tenn., in the heart of Appalachia, talking about timing for construction of the county’s first permanent Catholic church. After occupying a storefront since the mission began 10 years ago, Glenmary and the parishioners are breaking ground to build the county’s first Catholic church. “We’re doing it all with volunteer labor,” says Father Neil, casually. You read that correctly. Under Glenmary Brother Joe Steen’s leadership, the Church will be built completely by volunteers. And it will be a substantial church. 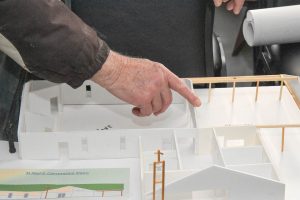 Glenmary Brother Joe Steen shows off a model of the new church.

“Our temporary electricity has been brought up to the property,” he says. “And a generous donor donated a sign for us to put up.” Construction of a new church is a big, positive deal for the county—perhaps a far cry from the chilly reception that Catholics got years ago in many ares of Appalachia and the South.

After the initial dig, though, things ground to a halt as the rains came in. “We broke ground in December and then it started to rain almost every day, so the grading work, the groundwork, all that prep work has come to a screeching halt,” bemoaned Father Neil when we interviewed him in early March 2019.

Soon, when the earth dries a bit, footers will be poured to support the walls that will follow.

Before long, “hopefully by Christmas,” says Father Neil, fingers crossed, the Catholic community of Grainger County will be worshipping in a new space.