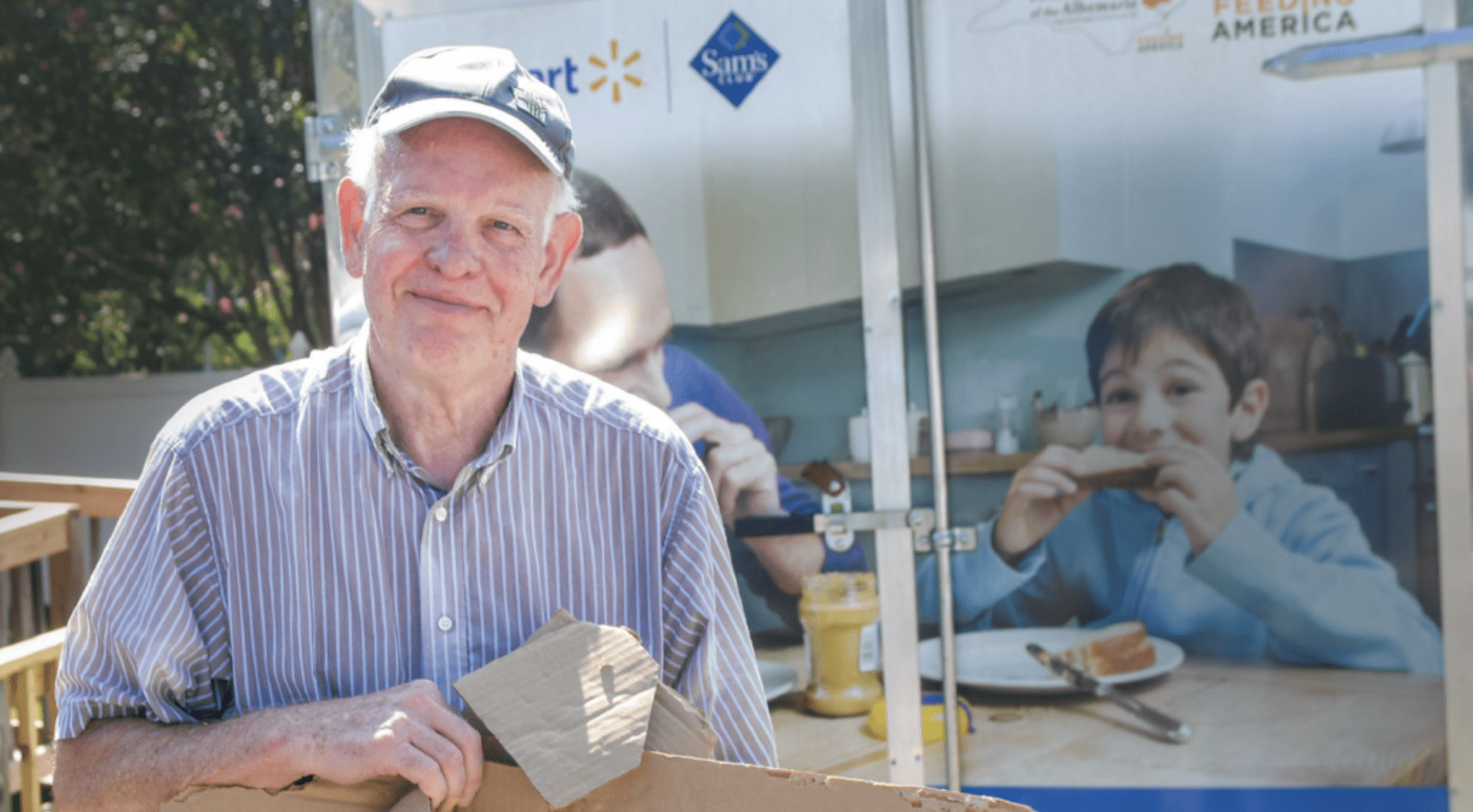 Brother Virgil Siefker is a long-time custodian of the Holy Spirit Food Pantry in North Carolina.

Volunteers push carts loaded with groceries while dozens of cars line up in front of the Good Shepherd Food Pantry in the small town of Windsor, North Carolina. It is a Saturday morning. Volunteers sweat under the sun while they hand out bags containing eggs, chicken, fresh fruits and vegetables, among other food items at a drive-through give away.

Inside a small trailer, Glenmary Brothers Curt Kedley and Virgil Siefker take green peppers out of a gigantic cardboard box and put them into plastic bags as part of the collective effort being done here today to feed the hungry.

Bertie County, where the food pantry is located, has a poverty rate of 23 percent, according to the U.S. Census. “The county is losing population because we don’t have jobs,” Brother Virgil explains. That is why these Glenmary missioners run this ministry, inspired by Matthew 25:35, “For I was hungry and you gave me food, I was thirsty and you gave me drink.”

“This is Glenmary’s social ministry to those in need. We’ve been about this for a long time now,” Brother Curt adds. He and Glenmary Brother Jack Henn were part of the founding group of Good Shepherd Food Pantry more than a decade ago. A couple of years later, Brother Virgil came onboard. 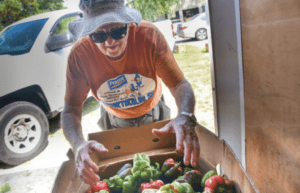 In eastern North Carolina, Glenmary serves missions in three counties in addition to the food outreach. There is St. Joan of Arc in Washington County (Plymouth), Holy Trinity in Martin County (Williamston) and Holy Spirit in Bertie County (Windsor). The three are located about 30 minutes apart. Some parishioners from these mission parishes volunteer at the food bank.

Good Shepherd, which has operated since 2009, started the drive-through distributions in 2020 due to the COVID-19 pandemic. Currently, some 450 families a month receive groceries this way, Brother Virgil says.

Additionally, the food pantry delivers emergency packages to three-to-four families every month. “Somebody who is in need of food calls in, especially at the end of the month, when money is shorter for families,” Brother Virgil explains. The person who takes those calls and delivers the packages is, many times, himself. He has also served as treasurer for Good Shepherd.

Among the beneficiaries of Good Shepherd are two women in their 60s. “They don’t have jobs, so they receive a little bit of income and some food stamps, but by the end of the month, they have run out,” Brother Virgil says.

Besides addressing food insecurity in Bertie county, Good Shepherd also supports local farmers, says the director of the food pantry, Deborah Freeman. To do so, they organize a farmer’s market every Friday.

“It’s a huge success as far as getting fruits and vegetables to the community and supporting our farmers,” Freeman says. “We have a number of different farmers that come to us that sell the produce there. Then, what we don’t sell at the farmers market, we bring it here on distribution day and we distribute it out to the community so it never goes to waste.”

The market also brings local students an opportunity to sell produce that they have harvested at  school plots.

In all the food pantry does, the two Glenmary brothers are instrumental. “They are the foundation, I would say, of Good Shepherd,” Freeman says. “They are always in the background, but they are always doing something. For example, they come and pack canned goods and help the volunteers get everything ready for distribution, they would unload the truck, they would carry food to the cars, they just would do whatever it takes to make sure that Good Shepherd continues to move forward.” 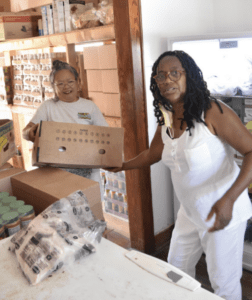 Deborah Freeman is the director of the Good Shepherd Food Pantry.

“If we move there, there’s one organization that is going to give us $30,000 to renovate these four classrooms,” Brother Virgil adds. “We have already lined that up.”

If this plan materializes, Good Shepherd hopes to offer new services specifically aimed at children and people over 60. For instance, the food pantry will be able to provide monthly boxes of food to the elderly.

Brother Virgil is hopeful that Good Shepherd will get authorization to take over that building and move there in the near future.