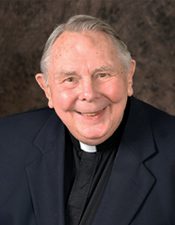 CINCINNATI, Ohio – Glenmary Father Roland Raymond Hautz died Saturday, March 14 at age 92. A missioner for 69 years, Father “Rollie,” as he was known, spent most of his life serving as a mission pastor in Virginia, North Carolina and Ohio.

Father Rollie, a native of Milford, Ohio near Cincinnati, is survived by fellow missioners and friends.

He began his Glenmary service as temporary assistant pastor of in Statesboro, Ga. in 1953. He then served as assistant pastor in Norton, Va., before assuming his first assignment as pastor in St. Paul, Va. Stints followed in Murphy, N.C., West Union, Ohio, Spencer W.Va., Jefferson, N.C., and finally Gate City, Va., before moving back to Cincinnati.

Father Rollie is well known as the longest-serving Glenmarian, having started with the society in 1944, just five years after its founding. He was ordained a priest in 1953, weeks before the death of Glenmary Founder Father William Howard Bishop. Upon Father Bishop’s death, he remarked that he was leaving behind “a good company of men.”

“If there ever was a Glenmarian who embodied the virtue of joy, it was Father Rollie Hautz,” said Glenmary President Father Dan Dorsey. “He was a missioner who sought only one thing—to bring the joy of Jesus Christ to others.”

Father Rollie spent his entire career in the missions. When he took senior membership and moved back to Cincinnati in 2014 he was asked about the highlights of his priesthood. “Of course, offering Mass every day is the highlight,” he said.

Because of the present situation with coronavirus, the Glenmary community will hold a private funeral. A public memorial Mass will take place at a later date.

He will be interred at Gate of Heaven Cemetery.