Home / News and Notes / Everyone is a Missioner

Everyone is a Missioner 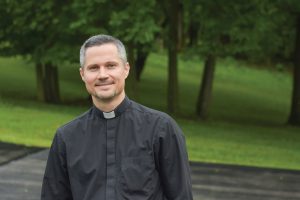 Pope Francis proclaimed October to be an “Extraordinary Mission Month.” It’s the 100th anniversary of a teaching that propelled the Church to think creatively about her missionary call. The days after World War I caused Pope Benedict XV to chart a renewed, deeper sense of mission in his teaching document Maximum Illud. That renewal continues to this day.

One hundred years ago, Pope Benedict XV talked about mission in terms of two goals: the salvation of souls and planting the Church. These two goals were affirmed at Vatican II, but within a renewed sense of mission. In that way we seek not simply an other-worldly sense of mission, and not the colonial, conquering sense of mission we might have considered in the past. Mission today has framed the ‘salvation of souls’ in the context of a holistic, integral and even cosmic understanding of salvation.

Yes, the Church is still concerned about the salvation of individuals and, true to scripture, maintains that every individual will be held accountable for his or her life. However we understand more fully that salvation includes the sanctification and redemption of the entire person, who exists within a particular culture, is part of a particular people, and is woven into the tapestry of creation.

Second, the need to ‘plant the Church’ is reinterpreted  in light of a theology of the Kingdom of God.  The Kingdom of God is more than a piece of earth or a group of people. It is the more comprehensive and eternal, Christ-ended reality towards which the Church is journeying.

This understanding plays out in very practical ways. For instance, that the Church might not be effectively planted in a particular territory does not mean that God has not been present and active in the lives of the people. It does not mean that the Kingdom, at least its beginnings, did not exist in these territories before Christians arrived.  Furthermore, just because a person does not have access to a ‘planted church’ does not preclude or exclude her participation in, or contribution to, the Kingdom of God.

So, let me propose three themes for us to reflect upon, in our culture, in our own Glenmary family, on this 100th anniversary of Maximum Illud.

All of creation can be a means of grace that engenders the missionary work of the Church. Though fallen, the cosmos has been ordered to proclaim the glory of God. The universe’s expanse, or the beauty of a flower, are each, in its own way, ordered towards bringing people into the fullness of the reality of salvation.

The Church cannot simply see her mission as expanding the boundary line between the Church and the world ‘outside.’ What is required of missioners, therefore, is a commitment to dialogue with the world to determine, as much as is possible, how the Kingdom has been a part of the world, and how people might be invited to a deeper relationship with the Lord of the Kingdom, Jesus Christ.

The old mentality of Catholics has been that missioners are men and women religious sent off to mission lands. We understand now, more fully, that all Christians, on account of our baptism, are called to be missioners. Everyone isn’t called to some distant land, or even to our home missions, but every Christian is called to a particular mission to be lived out in the world. Mission, after all, is the very beating heart of the Church.