Home / News and Notes / Brother Josiah: ‘The Moment I’ve Been Waiting For’

Brother Josiah: ‘The Moment I’ve Been Waiting For’ 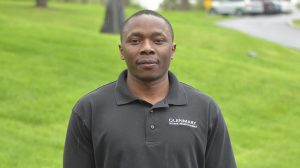 Brother Josiah Kimani’s journey to his Final Oath with Glenmary has taken him around the world. The Nyahururu, Kenya, native made stops in the Philippines and Qatar before reaching his ultimate destination as a missioner to rural America.

Josiah will profess his Final Oath at 10:30 a.m. May 29 at St. Matthias Catholic Church in Cincinnati, Ohio.

For the first 12 years of his life, Josiah stayed in Nyahururu. He then went away to a minor seminary boarding high school. He’s been traveling almost ever since.

“That was a defining moment for me because when I went to that high school, that’s where I met a vocation director from the Society of African Missions (SMA),” Josiah said. That meeting kicked off his discernment. He attended several vocation events for SMA. and when he finished high school, he envisioned himself joining them as a priest.

Josiah’s father and older sister, however, advised him against it. His father wanted him to marry and have a family. So, for three years, he put his plans on hold. He eventually did join SMA as a student in 2009. He studied philosophy and even did a one-year assignment in the Philippines. There he met the Brothers of St. Teresa.

“I was studying to be a priest, but I liked what the brothers were doing,” he said. “I never asked to join.” Prior to professing his first vows with SMA, Josiah asked for time off to think about his vocation. Around this time, he heard of Glenmary and began exploring the Glenmary website. He made contact and expressed a desire to learn more about becoming a religious brother.

But his journey wasn’t over. He then moved to Nairobi, and next found work in Qatar as a logistician. Eventually, he began communicating with Glenmary and found his way into the formation program. He reached the U.S. in 2016, ready to fully pursue life as a brother.

“When I worked with the Brothers of St. Teresa, I found what they did was something I wanted to do,” he said. “I wanted to be doing more things than being a minister. I wanted to be out there doing stuff with the people. I just liked what the brothers were doing.”

Having spent time with SMA, Josiah was familiar with the idea of being a missioner. What attracted him to Glenmary was the similar charisms of the organizations. Both go to the deserted and forgotten places and reach out to the marginalized.

Josiah is looking forward to his Final Oath and becoming a life-long member of the Glenmary community.

“This moment is a warm moment,” he said. “I feel I just got here yesterday. I applied. I learned what Glenmary is all about. I went to the novitiate and learned about the charism and community life. I feel more comfortable and feel like I am being supported by the community life. This is the moment I’ve been waiting for.”

Josiah is studying nursing at the University of Louisville School of Nursing’s Owensboro, Ky., extension while living at the Glenmary House of Formation in St. Meinrad, Ind. He hopes to one day engage in home health care ministry.

During his time as a Glenmary novice, Josiah spent time visiting the homebound in the missions. It was a ministry of presence where he would talk, listen, pray and read scripture. This experience confirmed his calling to life as a religious brother.

“When I was in the missions, I didn’t want to go back [home] to the novitiate,” he said. “I thought, ‘this is where I want to be.’ My moment [of confirmation] was the five-month placement during my novitiate. This is what I want to do. I feel comfortable around the people here in the missions and I was doing what I like doing best.”

Josiah has also earned the praise of Glenmary leadership during his formation.

“Father Tom Kirkendoll and I had the privilege of being the novice directors for Brother Josiah and as a result I feel I know him well,” said Glenmary President Father Dan Dorsey. “Brother Josiah is humble and cares about those on the margins, like the sick and lonely. He has a great sense of humor and, coupled with his personality, he puts those he encounters at ease.”

By the way, Josiah’s father and sister came around. Both have given their blessing and, but for COVID-19 travel restrictions, planned to attend the Final Oath Mass.