Home / News and Notes / ADVENTures in time: Midnight Mass in a Morgue

ADVENTures in time: Midnight Mass in a Morgue

Christmas Mass in a Morgue!

To get everyone in the holiday spirit during Advent, the staff of Glenmary Challenge magazine has gone back to the archives to share some of the best Christmas stories ever reported from the missions.
This final week day of Advent’s post comes from the Winter 1952 edition of Glenmary Challenge. In the story below, the late Father Joseph O’Donnell talks about Glenmary’s first Mass in Boonville*, Ky., which brought life to the most unlikely of places.
Christmas Mass in a Morgue 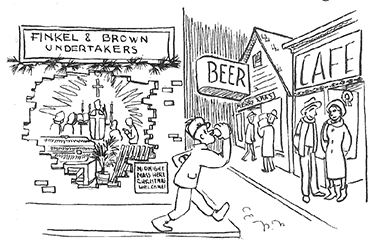 Christ came to Bethlehem for Christmas nineteen hundred years ago. An no one received Him but His Holy Mother, Joseph, and a few unlettered shepherds. Christ came to Boonville for Christmas almost two thousand years later. And no one opened their arms to Him then, but a few farmers who came with me from Basstown. And yet what an honor it was. Boonville is a little town, population 550, a sleepy town far off the beaten path, behind the mighty rolling hills of Kentucky.

The town tripped on its merry way this Christmas Eve. The things of the world counted; the truth of Christ was left far behind. But in the main room of an undertaking establishment, loaned for the occasion, Boonville became filled with Life. For the first time in its long hidden history, it was a town of glory.

Jesus Christ had come, with a few who knew Him well, to offer Himself to His Eternal Father, but none of the invited townsfolk showed up to see Him. There wasn’t a single visitor, dead or alive, to be filled with the joy of the newborn Christ in that damp funeral parlor. With the Faith and love of Jesus, His coming took on great life. It was not that thousands would come to worship Christ in Boonville that Christmas which counted so much. Christ came—that’s the important point!

Bethlehem and Boonville—they were much the same that day. No one cared in Bethlehem about the tremendous birth in the cave outside the town. No one cared in Boonville about overpowering renewal of His victory over death. Bethlehem had steeped itself in death, in the pagan ways of Rome, hanging on by only a thread to God’s ancient Law. Here in Booneville the death of the world encircled us—modern materialism racing in to crush out life; even the very room in which we knelt to adore Our Lord was a symbol of death—an undertaking parlor.

A Little Bell Tinkled for the Few

But it did not matter much to the little group who knelt in silent adoration. Only a small bell tinkled to urge them to lift their heads in joy as the Precious Body of Our Lord was held above their heads. Jesus was sanctifying in a way the forgotten town, tucked away behind the hills.
It was done now! Christ had come for His faithful few. He was not wanted, but He came. And He’ll be back—with all His might and all His grace some day. For men cannot stop Christ. They tried it once. They are trying it now. But they never succeed.

Some day Boonville will be His.  It will be no easy victory—that is certain. There must be sweat and tears; there must be prayer and more prayers; there may even be blood. But Christ will come again to Boonville. Christ will bless them all. His grace will crush their stubborn wills. The failure of Jesus at Bethlehem started something—the greatest success in all this world. The failure of Jesus at Boonville started something, too—the beginning of His glorious reign in a new region of Kentucky. It can’t be otherwise!
________________________________
Epilogue: The above story helps highlight the ongoing mission need. While a mission parish run by the Sisters of St. Francis does operate in Booneville, the county of nearly 5,000 boasts just 37 Catholics as of 2010. CLICK HERE to learn more about Glenmary’s mission to rural parts of Appalachia and the South. *The name of the town is now spelled as “Booneville.”
Read Previous Installment
ADVENTures in time: Father Chet and a holy family
ADVENTures in time: Christmas Poverty by Father Leo
ADVENTures in time: Father Dorn’s Christmas Tree 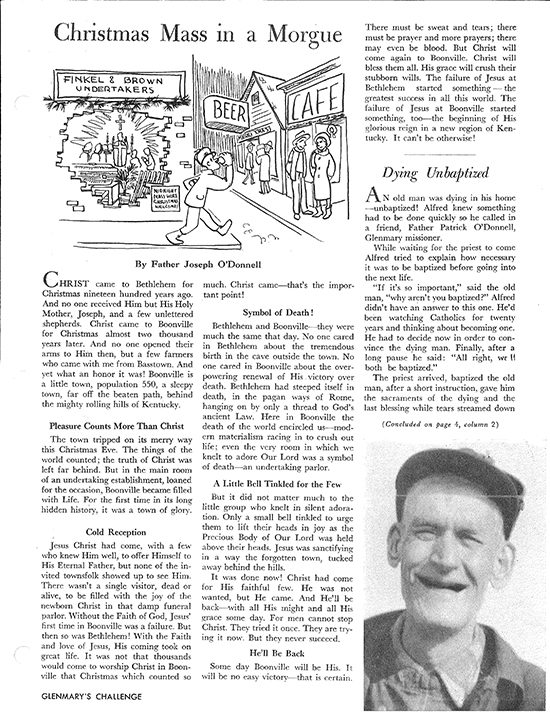