To get everyone in the holiday spirit during Advent, the staff of Glenmary Challenge magazine has gone back to the archives to share some of the best Christmas stories ever reported from the missions.
This second week of Advent post comes from 58 years ago in the Winter 1960 edition of the magazine. Father Leo Schloemer tells the tale of visiting a poor family in the hills of West Virginia. Nearly 60 years later, this same kind of story still plays out with Glenmarians delivering needed goods and Christmas cheer in Kentucky, Tennessee, North Carolina, and Georgia.

Well, my storefront chapel at Slab Forks was so poor, you wouldn’t believe this, that we didn’t even bother taking up a collection. The Slab Forkers were poor in every possible way: physically — undernourished and poor diets, intellectually — not much “book learning,” maybe some people wouldn’t like my saying it that way but they couldn’t get to school much, and poor spiritually — religion can’t even root in that climate.

One family, the Hugh Boggs, were a pitiful example of this three-fold poverty. The mother was a beautiful dark-haired woman in her late twenties. The father had a bad leg. He could only work on odd jobs in the timber. The six children were ragged and undernourished. Their three-room log shanty sagged with newspaper walls, a teetering kerosene stove, hazardous cavities in the floor, and one iron bedstead. (You know, with the accent on cleanliness nowadays I won’t describe the dirt. People don’t like to help the poor when they are dirty. They don’t think it does any good.)  The road was scarcely passable, “not even jack ass-able.” Chesterton said that. I always wondered how long my luck would hold out driving up Boggs Hollow.
Long before Christmas, we started collecting things for our Christmas boxes. The Siena Guild sent us shoes and clothes. Three days before Christmas a near-by disc jockey brought be a whole car full of leftover toys from their Christmas party. Friends supplied cash. You should have seen the rectory; boxes all over the place.
About 4 o’clock Father Morrison, Brother Edward and I fanned out in three directions. A light snow was falling. “Some of those side roads are going to be bad,” I mused. The sky had spots of grey and black. The countryside was stark with winter. “I hope I make it back for Midnight Mass,” I thought as visions of knee-deep mud bogging down the car came floating up in my subconscious. Pretty good, eh? At house, after house, I chatted with the people and saw how truly they said, “We don’t have much Christmas here.” Some didn’t even have a cheap wreath or a cardboard, “Merry Christmas” sign. Our boxes of clothes, toys and sometimes food brought shouts of “Hey, oh glory, and mmmmmm!”
Three and one-half legs 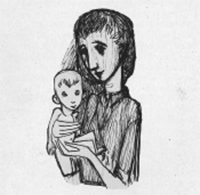 The Boggs were my last trip. I planned it this way in case I got stuck. The snow was beginning to pile up. A tiny wisp of smoke rose from the chimney. As the creaking, saggy door swung open. I could see eight pairs of eyes hovering about the stove. “Merry Christmas! I brought a few things for you all.” I sank down on a three and a half legged chair.
Ever sit on a chair that wasn’t a whole one? Someone lighted a kerosene lamp and they began to look through the box. There was something for everybody. Brother and I had packed it that way. The Boggs didn’t say much; the taciturn type. Yet eight pairs of grateful looks said a lot. I “joshed” with the kids and bit and then “allowed I’d have to be leaving.” As I stepped on the porch, Mrs. Boggs with the baby in her arms followed me. She said, “Hugh and I never believed in Santa Claus, but he really came through this year. We’ll have a real Christmas this year for the first time. We sure do thank you.”
As I headed back to the base parish, my heart was full. I had had the real Christmas joy of helping the poor. The poor thanked me, but they should have thanked all the friends of Glenmary. They were the ones who made it all possible. 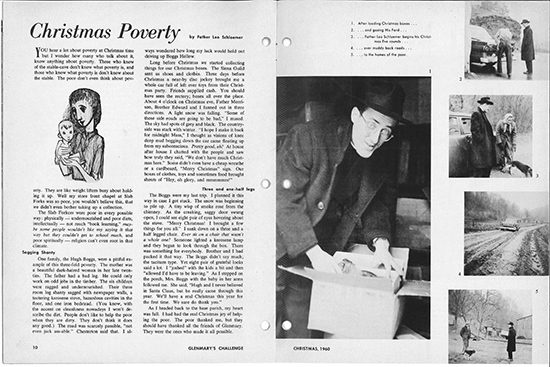