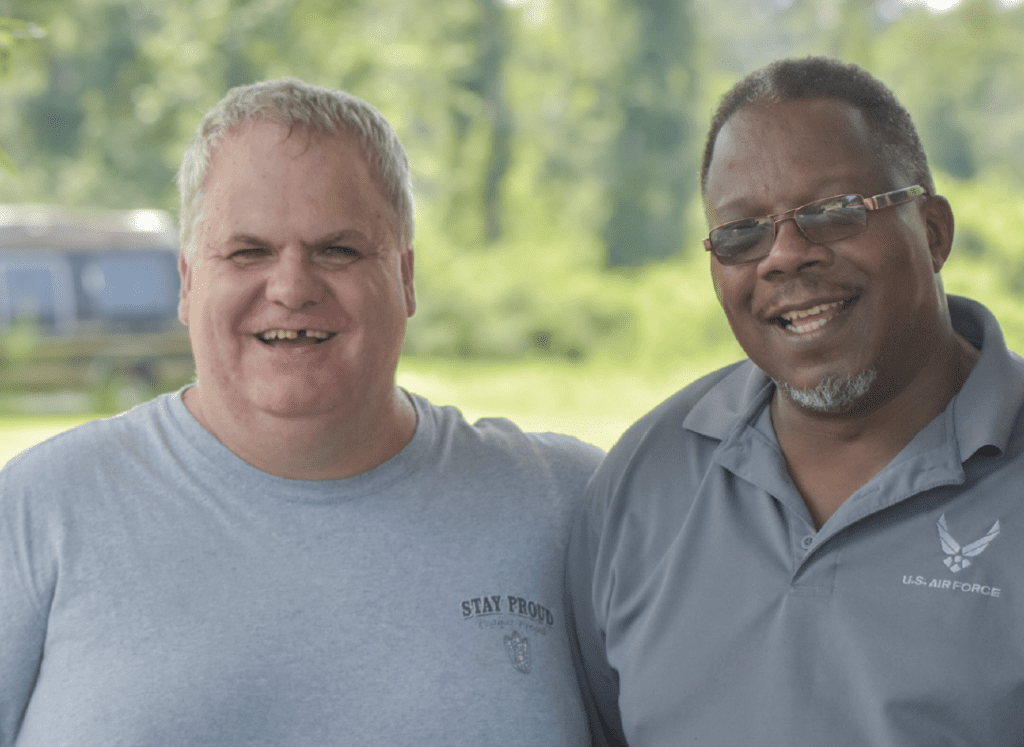 A Catholic brother and a Baptist preacher work together to change lives in rural Georgia.

Glenmary Brother Jason Muhlenkamp is a man on a mission in Georgia’s southwest corner. Driving outside of Blakely, past pavement to the red-dirt roads, to a mobile home down a gravel drive, he leaves his van and knocks on a worn screen door. A weary-eyed woman eventually answers his knock and begs off coming into town today. Brother Jason quietly accepts her excuse and comes back to the van, then drives off to his next stop.

It’s the day for “Neighbor to Neighbor,” a twice-a-week program that Brother Jason, a social worker, has started with a local Baptist minister, Pastor Darrell Alexander (New Zion Baptist Church). As we drive off, Brother Jason explains that the woman who lives in the mobile home we just left has a drug problem, which seems to have returned.

“Pastor Darrell had this idea 10 years ago,” says Brother Jason, speaking not only of Neighbor to Neighbor, but also of a handful of other programs, all operating under the banner of C-Hope Ministries (“see hope”). The pastor, a career U.S. Air Force officer, had recently retired and now lives in Blakely. He got interested in community service soon after he arrived, then eventually felt called to lead a Baptist congregation. On the service side, “He needed to collaborate with somebody, to build a proper support system,” says Brother Jason. He found a partner in Brother Jason and Glenmary.

The next stop on our ride is a housing project in town, where Brother Jason once again leaves the van and walks to a few apartments, and people head for the van. One is a former felon, on probation still; others just need a job and signed up for the small stipend that Neighbor to Neighbor offers to keep people coming. As the van fills we finally arrive at Blakely’s Neighborhood Service Center, where class soon will begin.

“The goal is to promote self-sufficiency,” Brother Jason says. Participants meet twice a week for a morning, working towards personal responsibility to better shape their future. “The goal of the program is for the participants to set goals,” says Brother Jason. The goals are in four areas: faith and family, finance and education, social, and physical health and well-being. “Maybe they have dreams, and sometimes these dreams get hidden because people are stuck in survival mode. We try to move them from surviving to thriving.”

Early County, after all, is a place where survival itself is an issue for many. It has a poverty rate of 28%, more than double the national average (13%).

Brother Jason and Pastor Darrell first met at a local ministerial fellowship, explains Brother Jason, then worked together at a Thanksgiving meal. “That was the start of a good friendship,” Brother Jason says. They worked together on smaller charity projects, then, with Glenmary Father John Brown, organized a summer Bible school that remains a staple in the community. Along the way, they developed into a partnership of service. Both men are charismatic, each in his own way. C-Hope Ministries, home of Neighbor to Neighbor, pairs Brother Jason’s skill as a social worker with Pastor Darrell’s skill of organizing and maintaining programs.

Pastor Darrell likens it to a scene from Acts of the Apostles, chapter 3: “I view what Jason and I do is like Peter and John going into the Temple to pray. As they’re going in they met this lame man. The lame man is all of these people that we deal with, looking for somebody to lift them. I view Brother Jason and I as Peter and John. John was more the Catholic, that laid-back type,” says Pastor Darrell. He laughs as he says that, since you might think Peter, the first pope, would be the Catholic!

He picks up a little preaching energy as he continues: “John was more well presented. He knew the script. Peter was that fiery guy, always getting in trouble, you know, going right out there. I viewed myself kind of like Peter with the more charismatic type of preaching. What I love is, they decided to put aside their differences. Now, they have reason to be different. Peter could say, ‘Listen, I am the rock. I oughta’ be…’  But John could say, ‘Wait a minute, I’m the beloved! I’m his best friend!’ But they decided to put aside those differences and go to church together. And on their way to church, they ran into a lame man. And that’s us, running into all of these folks around these parts.” That’s Brother Jason and Pastor Darrell on their way to Church, together.

‘Nothing but the Lord’ 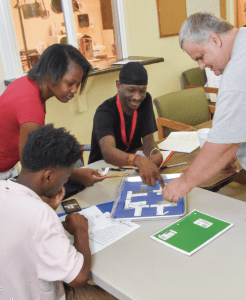 For the next few hours, here at the Center, Brother Jason will instruct the Neighbor to Neighbor participants, Lakisha, Crystal, Keisha, Kita, and Willie, leading them through a gentle discussion of how to set goals, and why they haven’t set goals in the past. Sometimes the issue has been domestic violence, rejection, addiction; in other cases it’s being overwhelmed by single parenthood and low-wage jobs. Brother Jason walks them through this curriculum of self-examination and life development that he brings from his social-work training. At some point, Pastor Darrell walks in, listens, and shares. His position as a local, African American Baptist minister carries of lot of influence with this group of participants.

The preacher and the brother, one more vocal, one quiet, know that Pastor Darrell’s dream of C-Hope Ministries has brought an opening for both of them to reach out in the community.

Pastor Darrell offers the example of a house fire: “We had two families whose homes burned. They lost everything. We were able to walk into that situation because of what Glenmary and others are contributing. ‘How are you doing, Pastor Darrell?’ the families say. My reply: ‘This is Brother Jason from C-Hope. We’re here to help you in this situation. I know it looks like you have no hope.’

“We were there to put them in temporary housing until Red Cross kicked in. We were able to clothe them until clothing came. We were able to give them food and shelter. That right there is nothing but the Lord, us being able to come together and be able to do that. And the community sees us working together.”

The next day, it’s early morning back at the Glenmary house, where Brothers Jason and Levis live. (Brother Levis nurses in neighboring Randolph County, where Glenmary Father Mike Kerin serves.) Brother Jason is the first one up, drinking a cup of coffee and taking care of emails before he heads off to the day’s activities. Then he’s out the door, heading for his car. “We’ve shared joys, struggles, challenges, and through that, we’ve built bridges,” he’ll say later about Pastor Darrell. Along the way, like St. Peter and St. John, they’ve helped a whole lot of people.

This story by John Feister first appeared in the Spring 2020 edition of Glenmary Challenge magazine.