Perseverance is a virtue. In the Letter to the Galatians, St. Paul writes, “Let us not grow tired of doing good, for in due time we shall reap our harvest, if we do not give up.” Paul notes the theme of perseverance more than once in his letters. It’s a theme that hits home to Glenmary priests and brothers as they reach milestone jubilees.

This year, five Glenmarians are celebrating. Father Gerald Peterson leads the class at 70 years in Glenmary. Fathers Dave Glockner and Ed Gorny are celebrating their 60th years in 2022. Finally, Father Tom Charters and Brother Joe Steen have reached their golden jubilees of 50 years. 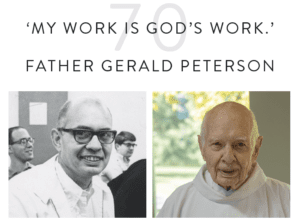 Besides sharing a connection to the founder, Father Pete has led a distinguished career in ministry. A news clipping in a file folder of career highlights includes headlines like, “Peterson known for dedication to county’s poor.” Father Pete is well-known for his environmentalism. He collected cans for recycling for a long time. He was one of the first Glenmarians to learn Spanish to better serve his mission communities.

Father Pete became a senior member in 2001 at age 71. For many Glenmarians, this change in status isn’t akin to retirement, but is a time to carve out a new role in the society. For many years Father Pete continued to serve in Mississippi, providing Sunday Mass help to a local parish.

Today, living in a retirement home near Glenmary headquarters, Father Pete continues to serve. The 93-year-old priest offers daily Mass five times a week. The work of evangelization never ends either. Father Pete said that he’d been talking to another resident about the faith, and that she’s recently asked to be baptized. God never stops working through Glenmarians! 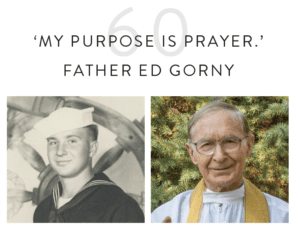 Almost 10 years after Father Ed, 90, took senior membership, an article about him appeared in the Southern Cross, newspaper for the Diocese of Savannah, Georgia. The headline read, “‘Retirement’ is a word Father Edward V. Gorny, GHM, doesn’t know.”

Ten more years after that, and Father Ed still feels God is using him to make a positive difference in the world.

Father Ed is a native of Detroit, Michigan. He came to Glenmary in his late 20s after spending time in college and in the navy. He’d seen a good bit of the world, and felt called to serve the mission needs in the United States. He has primarily served as a pastor/sacramental minister but also as treasurer and house director within Glenmary.

A clipping from a Spring 1978 article referred to Father Ed as a “generalist,” a nice term for a priest who does everything! His ministry took him to six states but more than 20 years of his service took place in various parts of Georgia.

Today Father Ed spends his time at the Glenmary residence in Cincinnati, Ohio, where he participates with his brother Glenmarians in daily Mass. He is often seen walking the grounds to keep in shape, sharing stories and jokes with any who stop to say hello.

While he isn’t getting out in the local communities as often as he once was, Father Ed is living his vocation.

“My purpose in life is to spend my life in intercessory prayer,” he said. “Particularly for anyone who is struggling spiritually or materially.” 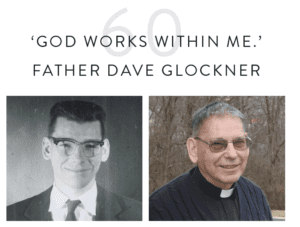 Sometimes things come full circle. Father Dave Glockner was born and raised in Scioto County, Ohio—a former Glenmary mission area. In 1962 he professed his First Oath with Glenmary and over the next six decades served in seven states. Today, aged 86, he can be found back in Scioto County, where he serves as a priest in residence to the county’s four Catholic churches.

“I’m kind of the exception being able to do this,” Father Dave said about returning home during his ministry. “I think my legacy is pastoral care. I always love to celebrate the Mass. I’ve always said, for a mission it’s important to love God first.”

In addition to six assignments as pastor, Father Dave also directed the Glenmary novitiate from 2005 to 2010. That assignment, like every other in his career, came from Glenmary’s administration.

“They were all assignments,” he said. “I was just open to whatever Glenmary wanted me to do.”

Eleven years after taking senior membership, Father Dave isn’t slowing down. He celebrates four Masses a week in his parish cluster in Portsmouth, Ohio and fills in when the pastor or associate pastor is unavailable. 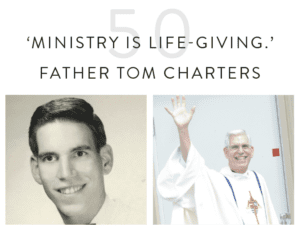 Father Tom, 73, has the distinction of being the only member of this year’s jubilarians who has not yet elected to take senior membership. Father Tom is the pastor of a successful and growing mission, St. Michael the Archangel in Unicoi County, Tennessee. It is possibly his last assignment before he does take senior membership, and it’s also the longest he has served in one place—11 years.

For most of his time in Erwin, Father Tom was the only priest on staff. Now he serves with Glenmary Father Kenn Wandera.

“I’m still active,” he said. “I still have a lot of energy. The ministry is life-giving to me.”

Like most long-serving Glenmarians, Father Tom has seen his share of travel around the southern United States. He’s been pastor in five states, and served a three-year term working with the Glenmary vocations department. Wherever he’s been, he’s had a unique way of looking at his role.

“I’ve always tried to call the people from the pews to be more involved in the parishes and that has worked over the years,” he said. “I’ve enjoyed working with lay people and lay ministers and I’m glad to see that becoming more prevalent in our missions again. I see that as a hopeful sign for the Church.”

Father Tom said any time parishioners had an idea for a new initiative he’d tell them yes, as long as it conformed to Church teaching. “I’d say, ‘It’s your parish, go for it. You’re the ones that will be here after I’m gone.’”

He says there’s more to being missionary than bringing people to the Church-although that is essential. “But there is the joy of working with other faiths and working on social justice issues.” 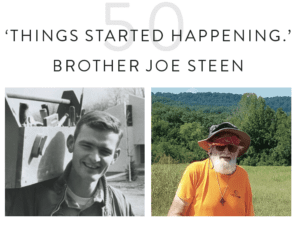 It always comes back to building for Brother Joe.

Early in Brother Joe’s life, he wanted to be a carpenter, and he spent some time apprenticing. He had decided to put his building skills to work in the Peace Corps in Malaysia. It was all set until he failed a physical. With his plans in disarray, he continued working. One day, for reasons he can’t explain, he decided to attend daily Mass. “Then things started happening.”

Brother Joe became a daily Massgoer and the parish priest told him about Glenmary. He never discerned with any other community. It was the right fit.

Brother Joe was put to work right away on the Brothers’ Building Crew, a group of Glenmary brothers who worked on building churches and other construction projects. Along the way he spent some time assisting with formation and vocations for the society, and some time as a parish brother. Mostly though, it’s been about building.

Brother Joe, 77, is a senior member, but remains a crucial part of Glenmary’s building efforts. As recently as last year, he led the construction team on St. John Paul II mission’s new church in Rutledge, Tennessee. In fact, he’s still working on finishing touches there.

Looking back on 50 years of ministry, Brother Joe said his legacy isn’t his, but God’s.

“It’s about how generous God is,” he said. “I’ve been so blessed in a myriad of ways. I’m an example of God’s generosity and mercy and kindness. I haven’t done anything, it’s all a pure gift from God. The secret in life is finding out where God wants you to be, and being there. Then you’ll be happy.”

This article first appeared in the Autumn 2022 Glenmary Challenge magazine.