Our duty is not to abandon ship, but to keep her on her course. 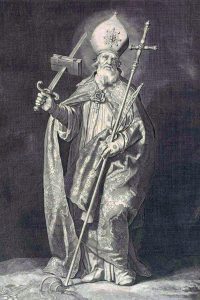 A missioner’s call typically doesn’t start in the missions. St. Boniface’s journey, in the 8th century, might be called “from monk to missioner.”

During today’s Brexit era, it may come a surprise that a man from England was one of the creators of Europe. But St. Boniface was called from his life as a Benedictine monk to tend to the Christians across the channel. In 716 he left for the continent, first working with another missioner, Willibrord, preaching in rural areas. Eventually Pope Gregory II named him Bishop Boniface.

St. Boniface is considered “the apostle of Germania.” His missioner’s work also had much do with the Church that already was growing. His work as bishop in reorganizing and regulating the Frankish Church helped to shape the Latin Church, Roman Catholicism.

St. Boniface’s greatest challenge was to bring Christianity to country people who had other religions (idolatry) and to do so in a region plagued by warfare. His efforts were unwelcome by leaders who sent armed robbers to kill him and destroy the books he carried. His life and death are well documented.

He is a martyr for his Christian faith. The work he did as a missioner brought people together in a new way, including bringing many to Christ for the first time. A millennium later, Christians in America of German heritage owe St. Boniface thanks for his crossing the English Channel.

Prayer:.
St. Boniface, you showed us the importance of combining monastic stability with missionary fervor. Pray that we, too, will use the foundations in our own lives to go forth boldly and preach the Good News, in word and deed.