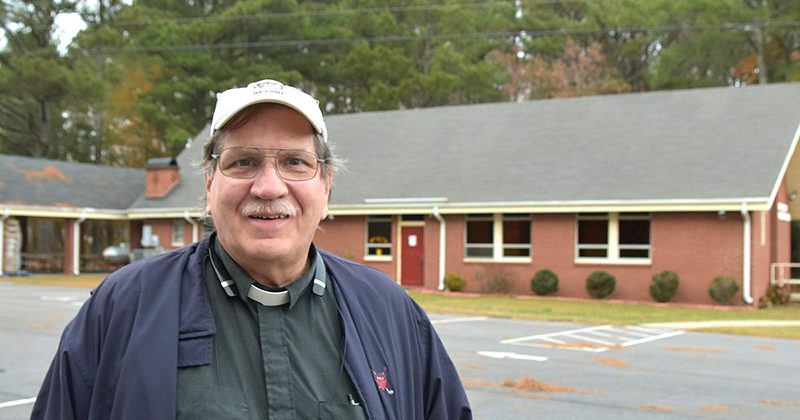 Father John Brown, a Catholic priest with cancer, reflects on life and death and says, “In the meantime, I’ll keep living.”

Some topics are easier to consider than others. When Glenmary priest Father John Brown was first diagnosed with cancer five years ago, he devoted himself to fighting it. He was repeatedly successful, but his physical opponent may soon win this battle. That’s what the doctor says. Father John is now living at the Glenmary residence in Cincinnati, in this case what might gladly be called the motherhouse. He undergoes tests, comes to daily Mass, hopes for the best, but has grown in his acceptance of what St. Francis of Assisi called, “Sister Death.”

There are readers who might not rather talk about such grave things—you might stop reading now, then, while you’re ahead! But Father John takes the opportunity of his eventual passing as a moment to reflect on life itself. We spent some time with him near the end of his last assignment, at the mission in Martin County, North Carolina, talking about life. After a good Mexican dinner out, we returned to his makeshift office-for-the-day, a table set up between the front pews and the altar. “The air-conditioning is on out here,” he says with a smile. Then he starts to talk.

“Five years ago, I was given a 50-50 chance of living one year, and I said ‘Wow!’ I certainly had been aware that we’re passing through this world when I went to Gettysburg, or to Mount Vernon, or Rome—there are a lot of people who were there and aren’t here right now! I’m part of that, part of God’s work in passing through.”

But his was not a naive detachment. He admits he is afraid of pain, and some of his medical procedures have been painful. Not surprising, he’s had sadness, too. “I had some frustration when it came back, and I think it’s sometimes tied in with anger.”

He tried bargaining with God: “God, there’s so much to do in this mission, and we’re making plans together toward growing and expanding this church. So why do you want to take me now? I’d even think, ‘I’m too good to be sick or I’m too important.’” It helped him to talk about this with a nurse-parishioner.

“I didn’t want to talk about it much, locally, in my parish.” But he did talk with another wise parishioner who said, “I’ve been around a long time, and I’ve seen a bunch of very good people who came and left, and the parish survived.” Father John admits, “That’s good to hear from somebody else. The parish will survive.” 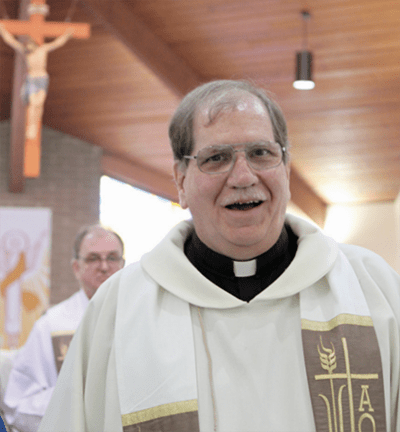 Slowly, as did biblical Job, as does every person, eventually, this priest with cancer is learning to accept that God does what God does, whether we like it or not. “One of the changes in me in the last few months is my ability to say, ‘Your will be done. God, you’re in the present, you’re in the past, you’re in the future. You already know the time, and it’s just a question of when you’re gonna let me know. In the meantime, I’ll keep living.” He would resonate with Servant of God Sister Thea Bowman, who, stricken with cancer, would say, “Let me live, until I die!”

“You need to put your will into trying to survive,” he says. “And I figure that God takes that into account in everything we pray and what we do.”

At age 68, he feels as if he’s a young man. “I’d always figure I’d go to about 84, then run outta’ gas, and then hopefully be doing something like some of my heroes, Glenmary Fathers Bill Smith and Joe Dean: still hang around to help celebrate Masses.” But he knows that old age is no given. “One of my patron saints is St. Martin of Tours, who went through all kinds of experiences, in and out of the military, and wondered if he was worthy to be a priest. I think he died in his 40s.”

Another of his favorites, St. Camillus de Lellis, was initially rejected for religious life because he had an ongoing medical condition from a battlefield wound. His history of gambling couldn’t have helped! Eventually he devoted his life to care of the sick, and is now patron of hospitals, nurses and the sick. His festering wound eventually took him, but he served to the end, even leaving his hospital bed to care for the sick. You can see why Father John loves that story.

Father John, former biology student, marvels at the body God has given him. In spite of this priest’s cancer, though, he doesn’t feel cheated. “There are so many thousands of things going on every minute in the body. What’s the surprise if some of them go wrong? Better to say, ‘God, look at this wonderful life you gave me.’ Our sight, our vision, our memory, our ability to love people, our ability to pray. Those are all gifts of God.”

It’s not just that Jesus promises heaven, he says. Jesus promises companionship along the way. And Jesus, of course, knows suffering. Father John knows suffering, now, too, and tries to offer that for others.”The first time I read Colossians 1:24, ‘In my sufferings for you, I make up what’s lacking in the sufferings of Christ for the sake of his body, the Church,’ I thought, What’s lacking in the suffering of Christ? Well nothing, except apparently our brain understanding it!

“Suffering’s certainly not my favorite thing to do,” he concedes. “For years I told God, ‘Okay God, I’ll offer up all kinds of things, difficulties, frustrations, things like that. But don’t take away my health! I don’t like to be sick.’” When he started to learn of his health problems, this prayerful man had to laugh. “It was like, ‘Okay, God, maybe you think this is funny and it kind of is!’” But then he adds a more serious note, maybe even a sacred note: “‘No,’ says God. ‘I want everything you have, not just what you want to give me.’”

When Father John first learned that his cancer had returned, not so long ago, he thought he would tough it out in North Carolina. He would get to his mission, lead Mass, then sleep in his car for a few hours—he didn’t have any extra energy. It soon became clear that he needed to come back to Glenmary and leave his busy schedule behind.

But he fondly looks back on his missions. He particularly remembers returning to Adams County, Ohio, for the dedication of a new church in Peebles. ”I got there, and there were all the people I knew, but also tons of people I had kind-of known. I felt like I had just been able to open up a trap door and stick my head into heaven for a while. All those people happy and proud and glad of each other and kind of putting aside the problems for a bit. I look forward to the joy of heaven.” 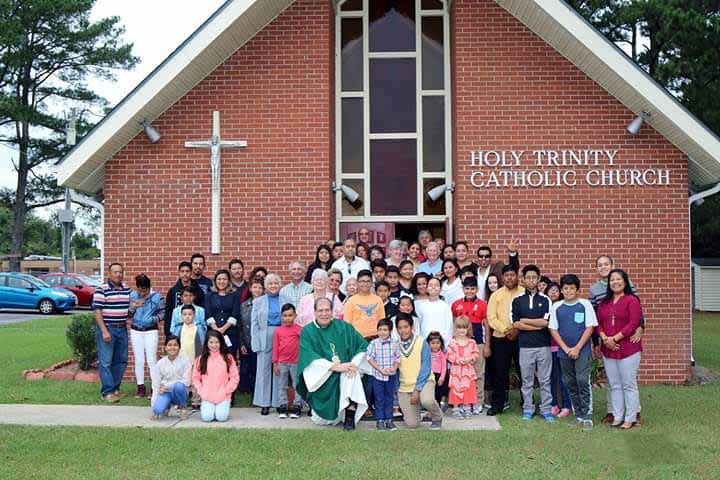 This story first appeared in the Winter 2022 edition of Glenmary Challenge magazine.