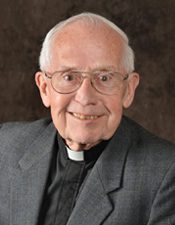 A journalist once called him a “circuit riding priest.” The writer was speaking of Father Bob Dalton’s service to a number of parishes in northeastern Mississippi, reminiscent of horseback-riding Methodist ministers of old. It’s a fitting comparison.

Since he came to Glenmary in 1957, Father Bob’s circuit has taken him from colleges to parishes, to Glenmary leadership, to official national dialogue with the Southern Baptist Convention, to leading a parish-services partnership among laity, priests and brothers.

Q: How did you hear your call?

A: This is not an edifying story, but a few months before high school graduation I was sent to the principal’s office. He chewed me out and dismissed me with a wave of the hand. When I got to the door, he said, “Come back here. Think about being a priest. I think you’d make a good one.” I came to Glenmary.

Q: You knew you were called?

A: Calls are mysterious, aren’t they? But I attributed a lot to the number of mission magazines that were coming into my childhood home. My mother would save her extra money and send it off to the missions. I’ve never looked back after I joined Glenmary. 57 years as a priest and a heart filled with gratitude! That doesn’t mean there were not hard days. I learned to persevere.

Q: Tell me about some of the difficulties that led you to persevere.

A: In the 1960s, everything I learned in the seminary was being overturned. When you’re out there living alone, it’s hard to keep up with it. At the same time, the country in the South was in upheaval over civil rights and I didn’t feel adequate to that challenge; I wasn’t prepared.

Q: How did you deal with that?

A: I was talking to a very wise priest on a regular basis. He kept encouraging me. And the African American folks endorsed what I was doing.

Q: It strikes me that you’ve been a good listener over the years. True?

A: I think the big part of evangelization is not telling your story until you’re asked. Just listening to the problems, the crosses, the sorrows, and the joys—there is where God is working in one’s life. From that you can build.

A: Immigrants often have a very insecure life. They just at times need somebody to listen, not to tell them what to do—they can solve their problems better than I can. But to know somebody that they know loves and cares goes a long way.

Q: You counseled recovering alcoholics. What did you learn?

A: I’ll use just one example. I had a large copy of Rembrandt’s “The Prodigal Son” in my living room. During our sessions together, we’d read the story from Luke 15 and then just study the picture.

Almost universally what I found was surprise. “God loves me.” So many had love driven away.

Q: What spoke to them in that painting?

A: I can remember one young fellow, he just stood in front of that picture for the longest time, so long that I was getting very uncomfortable. I thought, O.K., now what do I do? Finally he said, ‘Wow, I’m worth something after all.’”

This story first appeared in the Winter 2019 Glenmary Challenge magazine.