Home / News and Notes / A Hunger for Eucharist

A Hunger for Eucharist 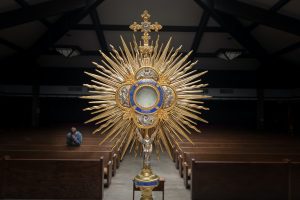 Janice Wilson put Glenmary into her long-term giving plans because Glenmary brought her to the Eucharist. Sounds simple enough. But establishing churches that will offer the fullness of Catholicism in the missions is anything but simple.

Janice grew up as a devout Baptist in the 1960s in Boone, North Carolina, an Appalachian town of about 20,000, high in the Blue Ridge Mountains. It is home to Appalachian State University, and is one of scores of towns where Glenmary first brought a permanent Catholic presence.

“I still remember when I was in the eighth grade, “she says, our minister at the first Baptist church took the young people, on a few little trips to broaden our horizons. We went to a synagogue for a service. And then we went to the Catholic church in Boone, and the [Glenmary] priest talked to us.”

Baptists are known for their love of Sacred Scripture, and Janice is no exception. In the Gospel of John, Chapter 6, Janice read, “I am the living bread that came down from heaven; whoever eats this bread will live forever; and the bread that I will give is my flesh for the life of the world” (John 6:51).

Janice was developing a hunger for the Eucharist as she prayed over that passage. “We spent a summer in England and we went to Westminster Abbey (Anglican). It was the first time I saw candles. I smelled incense, I saw liturgical robes and I thought, We don’t do this in the Baptist Church. I was just as a child, but I never forgot.”

As she grew up she became a librarian, first at Appalachian State in Boone, then eventually at Truett McConnell College (now University) in Cleveland, Ga., where she was Director of Library Services. By coincidence, Cleveland, too, was a budding Glenmary mission.

“So here I was living in Cleveland, Georgia, where also the church was started by Glenmary missioners. And I kept thinking, I’m working at a Baptist college. What if I became Catholic? I could lose my job! But one day I simply called to the Catholic church and just asked if I could come and talk to somebody.” The sisters who lived there “had me come over. I went through RCIA with them and then the next year showed up and went through RCIA again.” Those Rite of Christian Initiation for Adults classes were preparation for her to enter full communion with the Roman Catholic Church.

The rest is history, you might say. She didn’t lose her job, and remains a vibrant Catholic to this day.

“Glenmary provided a church and a welcoming Catholic community to me when I wanted to join. If it were not for Glenmary… Glenmary had started all the local churches here in Northeast Georgia.”

Her Baptist sensibilities and culture still provide ways for her to talk about her faith. She has this advice for her fellow planned-givers: “Remember, every dollar you give to Glenmary has the potential of leading someone to faith in Jesus Christ.

“I find Glenmary to be an inspiring outfit, just being able to start something and move on and start something else.” She’s included Glenmary in her long term plans because, what she sees, she likes. As she says, with a laugh, “Librarians just know things!”