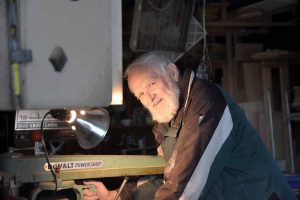 Two types of people in this world wait in different ways: bus people and plane people. This Advent, I hope to be a bus person.

Bus people are generally people with time to spare. They don’t think of themselves as important. When a delay occurs, they most often simply wait. Plane people, on the other hand, cannot wait. When a delay occurs they march to the counter with demands to be on time. I hope to be a bus person because I know that the one I wait for has waited for me for eternity.

Waiting has a very different meaning for me than it once did. In the past, it was usually a problem; now, it is a gift. Waiting is a time when I am not in control, and that is a lesson this old guy continually needs to learn. I cannot wait faster or slower. And what good is it to avoid waiting by creating distractions? Waiting is waiting. Period. But I wait in hope.

The Hope of Christians

St. Paul tells us that there are three lasting things: faith, hope, and love. I find it hard to separate hope and faith. When I see one, I see the other. But hope has a character of its own. Hope is not simply an emotion or virtue, it is a way of life.

When I think of hope I am reminded of a man I know, Bill, who has serious health problems. He takes care of his wife, who has serious health problems of her own. All the while he is taking care of two siblings who have intellectual disabilities. In spite of all this, he volunteers at church as much as his health allows. A man of such character, of course, is the rock for his extended family. He lives on hope, and he considers all of it ordinary.

I think of an immigrant family who settles in this country full of hope, just as my Irish parents did. An immigrant’s hope will turn one way or the other. Often it is fulfilled because of opportunity, hard work, and prayer. Just as often it is broken because of politics and fear.

I consider my own small town, in eastern Tennessee, where I sometimes see a small Protestant church struggling with diminishing membership. Yet the congregation hopes for growth, to be a Christian witness in their community.

Sometimes, working among families in the community, we Glenmarians, and our parishes, share that hope in very small ways. I would like to tell you a small story, not one about a church being built or a family finding a home or two churches working together. This small story is a Kingdom story,  big in its own way.  We were building a house for a family who had several kids. One daughter, Lee Bob, was about eight. I was very busy one day when Lee came over to me and asked, “Joe, would you like to see my music box?” I was tempted to say “No, I’m busy,” but thanks be to God I said yes!

She was all excited as she told me how her dad had gotten the music box for her. He bought it at a local store, used. It played music when it opened, had red velvet inside, and a dancer that moved to the music.

It turns out Lee had shared something very precious with me. In her pure and innocent joy, she had to share it. At that moment, she was teaching me about God.

She taught me that, although we wait and hope in the big things, such as the house I was repairing, hope is fulfilled in small ways. She taught me this: that the plane person who I am, often going to the counter to solve my problems, needs to be transformed into the bus person, the one who learns to wait for Kingdom stories. That’s what Advent is about.

This story first appeared in the Winter 2019 Glenmary Challenge magazine.