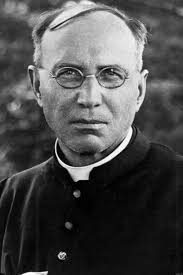 “Christ Jesus, save me or I will perish!”  Young Thomas Price found himself shipwrecked and near drowning off the coast of North Carolina. It was 1876; he was en route from his Wilmington home to enter the seminary in Maryland. Already a devotee of the Virgin Mary, he had a vision of a beautiful lady, surrounded by light, who pointed him toward a large plank floating nearby. It saved his life.

Price went on to become the first native-born North Carolinian priest. He served in the North Carolina missions (including the area where Glenmary serves today) for over twenty years in the post-Civil-War South. Along the way, though, he was dreaming of serving overseas. He wanted to  bring the fullness of the Catholic faith to China.

He and a Boston priest-friend, Fr. James Walsh, eventually persuaded the US bishops to allow them to start a seminary for the purpose of establishing the Catholic Foreign Mission Society of America. Their popular name, Maryknoll, refers to Mary and the knoll near Ossining, New York, where they built the seminary.

Ven. Price himself was on the first mission band to China—his missioner’s experience in North Carolina put him in the lead at Maryknoll’s first mission. Respectful of the local culture, seeking gently to  find bridges between the gospel and local traditions, he modeled a missionary approach that persists.

One of many dangers of remote missionary life claimed his. After only a year and a half in China, he developed appendicitis. He traveled two days to get to a hospital, but was too late for effective surgery. His missioners’ society, though, was up and running, and has served the poor in many countries ever since. The words of St. John Paul II, say Fr. Price’s mission well: “Peoples everywhere! Open the doors to Christ!”