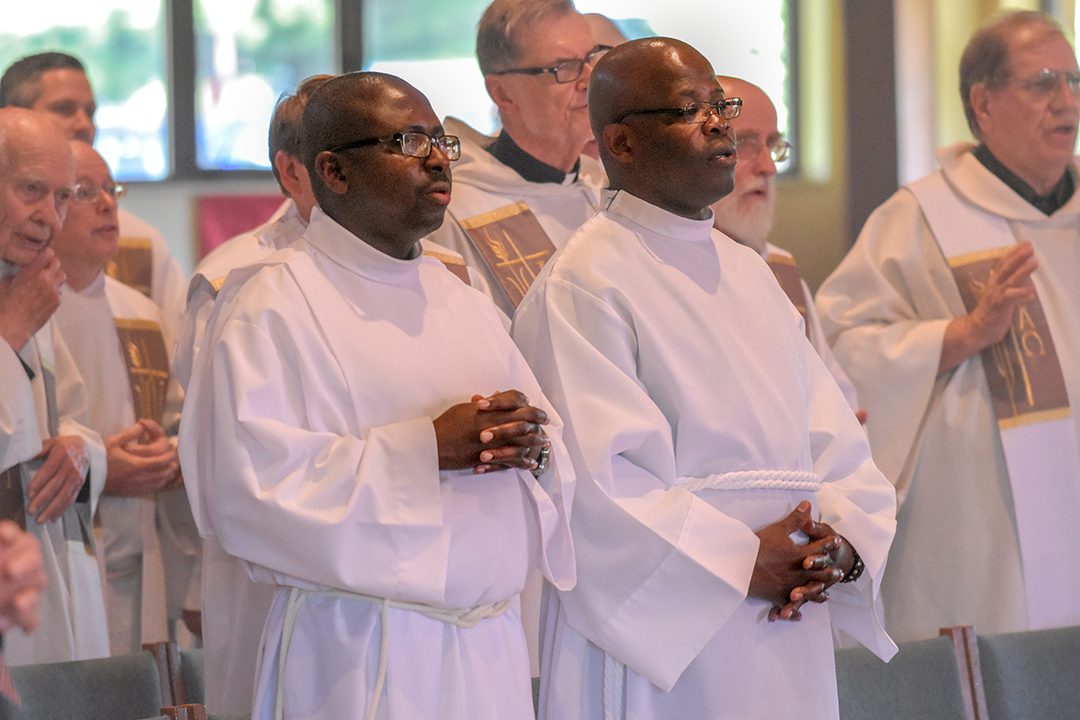 Richard Toboso, left, and Charles Aketch, who will be ordained priests April 27, made their Final Oaths with Glenmary in 2018. (Photo by John Feister)

The ordination of a man to the priesthood comes at the end of a long journey.

For members of religious communities the men go from discerner to aspirant, to novice, etc. Eventually they become deacons, and generally after a year, they may join the ranks of the priesthood. For Glenmary Deacons Charles Aketch and Richard Toboso, that journey culminates at 10 a.m. April 27 at St. John Neumann Catholic Church in Cincinnati, Ohio.

The two native Kenyans made their First Oaths with Glenmary in 2015 and have continued their formation since. On Saturday, Diocese of Knoxville Bishop Richard Stika will ordain them to the priesthood

Deacon Charles is from Kisumu, Kenya, where he learned to value community life from living with his parents and seven siblings. He attended Mass regularly with his grandmother, whose faith served as a strong example. After training for some years with another Catholic community, Deacon Charles found a passion for Glenmary’s way of missionary life and started over, desiring to serve the people of the rural South and Appalachia in the United States.

Deacon Richard grew up in a strong Catholic family in Kakamega, Kenya. He is the fourth of eight children. His mother provided a constant example, the family valued community prayer, and his brother introduced him to altar serving. As a young boy, Deacon Richard looked up to a missionary priest from Ireland who served in Kakamega. Despite the struggles of missionary life, the priest was a role model, in part inspiring him to pursue missionary life.

Upon the ordination of these men, Glenmary Home Missioners will be comprised of 28 priests and 13 brothers. Glenmary has nine men in formation preparing for missionary priest- or brotherhood.

The ordination Mass is open to the public. A reception will follow in the church undercroft. St. John Neumann Church is located at 12191 Mill Road, Cincinnati, Ohio 45240.