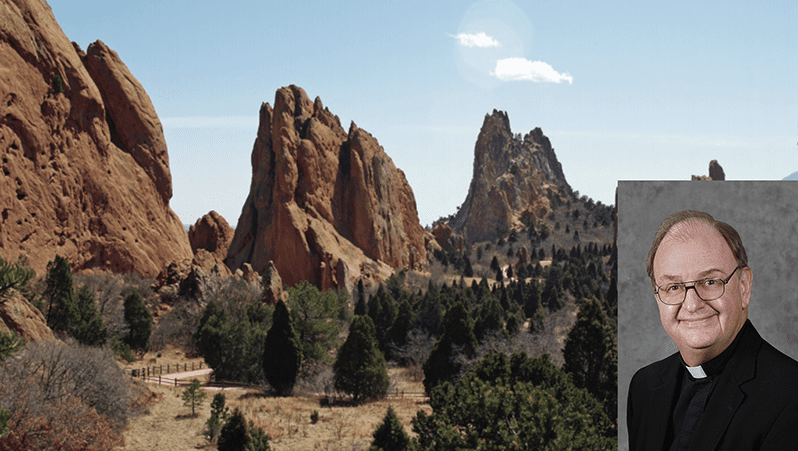 As Jesus often prayed in nature, Father Don Tranel rekindled his passion for Glenmary’s ministry during his 2020 sabbatical in Colorado Springs, Colorado. He began work on a new mission in January 2021.

Father  Don Tranel enjoys the precious gift of time on sabbatical as he prepares to take on the
founding of a new mission.

Jim Croce in his 1973 hit single “Time in a Bottle” says “There never seems to be enough time to do the things you want to do.” Amen to that! I have always had an acute awareness of time and I often challenge myself regarding my time management skills. I recently completed eight-and-a-half years of ministry as Glenmary’s Director of Development, which was preceded by my being a mission pastor in Arkansas, Oklahoma, West Virginia, Mississippi and Georgia. My superiors honored me for these rites of passage and years of mission ministry by granting me a sabbatical before beginning my next task.

Sabbaticals are wonderful! I was graced with the precious gift of time, minus the expectation to produce and minus stress. How great is that! I chose to do my sabbatical at The Mercy Center in Colorado Springs, Colorado. This location appealed to me as I love an adventure and I had never been to this part of the country before.

The wisdom of participating in deliberate prayer and rest is an honored tradition in the Church, and Jesus promoted this time away. In Mark Chapter 6 we read, “The apostles gathered together with Jesus and reported all they had done and taught. He said to them, ‘Come away by yourselves to a deserted place and rest awhile.’” Jesus prayed with and for others but he also saw value in praying alone, especially prior to significant decisions and events. Jesus often prayed in nature and we see him dedicating long periods of time in prayer.

My personal deserted out-of-the-way place was Colorado. I could see Pike’s Peak from the window of the room where I stayed. I frequently visited “The Garden of the Gods,” which was in my neighborhood. I was close to Seven Falls, which is promoted as “The Grandest Mile of Scenery” in Colorado.

I will never forget my sabbatical. I am blessed with memories that will sustain me and enhance my ministry forever. My experience was amplified by the reality that, due to the pandemic, there were only five of us on sabbatical. Lifelong friendships were formed as we shared engaging and timely classes, and socialized together.

Arguably the precious gift of time was the best part, however. Unlike Jim Croce’s song, there was enough time for me to do the things I wanted to do.

So, how does one know if the sabbatical was effective or worked in terms of preparing me for my challenging new mission assignment of trying to start a Catholic Church in Smith County, with residence in Brush Creek, Tenn.? Some things are certain. I believe in the efficaciousness of prayer and I walked on Holy Ground. I had the privilege of a lifetime and it has made all the difference. I have heard it said that, “the future is not the result of choices among alternate paths offered. It is a place that is created. Created first in mind and will. Created next in activity. The future is not someplace we are going to but one we are creating. The paths to it are not found but made and the activity of making them changes both the maker and the destination.”

There was a plaque in my room while on sabbatical which read, “the will of God will never take you where the Grace of God will not protect you.” This quote is almost identical to the one I chose for my ordination card in 1988. Go figure! Indeed, although no guarantee of success, I remain ready to embrace a future bright with God’s potential.