“If each one would light a candle we’d have a tremendous light!” 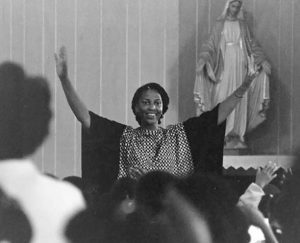 There is such a thing as “reverse mission.” It has to do with the learnings of life in the missions coming back into the culture of the missioner. Servant of God Sister Thea Bowman, FSPA, would count as a reverse missioner in even a richer sense. She, an African-American woman who grew up in deep Mississippi, in the decades that spawned the Civil Rights movement, joined Wisconsin Franciscan missioners. Far from home, in LaCrosse, Wisconsin, she developed her own sense of mission, and passionately practiced it in Wisconsin. Then, decades later, came back home to do the same in Mississippi.

In the dark days of lynchings and all manner of oppression, just two generations removed from slavery, Mississippi was the darkest corner of racism in the Deep South. Franciscan sisters, among other brave northerners, had set up a hospital and school for African-Americans in young Bertha Bowman’s hometown of Canton, Mississippi. Teenaged Bertha Bowman was so impressed that she joined the sisters. She was taken to Minnesota for formation in the Sisters’ motherhouse, and eventually became an accomplished professor of English at the Sisters’ Viterbo College (now University). She was known by then as Sister Thea Bowman.

In the 1970s, at the invitation of the local bishop, she came back to Mississippi to direct a cultural-awareness program. She interacted with a number of Glenmary missioners there. Sister Thea devoted herself to forging greater understanding and cultural sharing among whites, blacks and Native Americans. Her reputation as a beacon of black Catholic identity–in music, liturgy, and all manner of cultural understanding–spread all over the United States. She died young, at age 51, from cancer. Her witness in dying with love and dignity, in a very public way, was a capstone to a holy life. Her cause for sainthood was approved in 2018.

Prayer: Sister Thea, you worked to overcome racial divisions in our nation and in our Church. Pray for us to have the passion and courage to continue working for reconciliation and peace.