He dreamed of becoming a missioner. 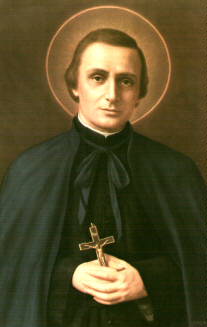 These days word spreads quickly; people move far away yet we hear from them day to day, or more. Yet the idea of going “far away” still leaves a lot to our imagination. That was true for St. Peter Chanel, who, as a young man in the early 1800s read stories the missioners had sent to Europe from America. His imagination was filled with images of mission in faraway places.

His days overseas would come, but first he was called to support his brothers working in the rural home missions in France. He had joined a new society of priests, who were known as a diocesan institute at the time, the Society of Mary. The group grew, as did related groups of Sisters and Brothers.

It was the need for missioners who would go to the Pacific Islands, Oceania, that birthed the Marists more fully. Early in the 1800s the pope assigned to the Marists missionary work in Micronesia, New Zealand, and the rest of Western Oceania

Father Peter Chanel went there, his dream realized, but reception of Christianity in the islands was spotty. In some places he was welcome; in others, rejected as threatening the political powers. Ultimately, he was martyred by a tribal king for his efforts, though the Church sprouted, and the kingdom became Christian soon after his death and remained so.

Prayer: St. Peter, pray that each of be given imagination for how we might spread the Good News. Pray that we might see in your life that we, too, have a mission, even one that can come at great cost.