“Let us leave acts, not words.” 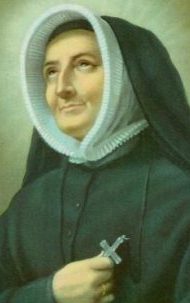 If it weren’t for St. Madeleine Sophie Barat, we would never have had the great missioner work in the U.S. by St. Rose Philippine Duchesne. It was St. Madeleine, founder of schools for girls in France, who commissioned St. Rose and her mission band to cross the Atlantic and head for the American frontier. Not surprisingly, St. Madeleine was a missioner in her own right.

St. Madeleine came up in the French Revolution, a crisis of people suffering poverty at the hands of those in extreme wealth. “Let them eat cake” are the infamous words attributed to Marie Antoinette, which summarized the nobles’ uncaring attitude.

In the midst of revolution and a reordering of society, there was a deep need for education that would empower people living in poverty. St. Madeleine saw that need for young girls, a novel idea in her day. The Order she founded, Society of the Sacred Heart, was devoted to that mission. She started schools in Paris, and took her concept, and sisters, to cities and towns across France, Europe and even to the New World, in the group she sent, led by St. Rose Philippe Duchesne. St. Rose and her sisters established schools across the Indiana frontier and beyond.

Whenever St. Madeleine would found a school for the well-to-do (who could afford to initiate schools) she would insist on establishing a nearby school for poor girls. What an impact on society she had!

A struggle of her day was Jansenism–a theology that emphasized Original Sin and the idea that people could work their way out of it. Devotion to the Sacred Heart of Jesus—to the mercy of God—was a signal that salvation is in God’s hands, not ours. The name of her community reflects that.

Under her 65-year leadership, the society founded hundreds of schools in 12 countries in Europe, Algiers, and the Americas. In 2015 there were about 2,600 Sacred Heart women serving schools in 41 countries.