“Holiness consists of one thing: to do God’s will!” 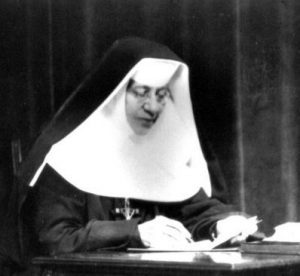 What if you brought a great idea to the Pope and he said, “Go and do it yourself!” That’s pretty much what happened to Katharine Drexel. She went on to become one of America’s great Catholic missioners.

Katharine’s father was Philadelphia tycoon Francis Drexel; her mother died weeks after Katharine’s birth. At her home near Philadelphia she learned charity from her stepmother, Emma Bouvier, who opened the family doors twice weekly to distribute food, clothing and rent assistance.

During young Katharine’s travels, she saw the disgraceful treatment and poverty of Native Americans. Stepmother Emma’s death, when Katharine was still a teen, taught her that all the money in the world couldn’t answer life’s deepest questions. Deep within, she heard a calling to religious life—perhaps even a cloistered, contemplative life.

After her father died, Katharine and her sisters each received a staggering modern-day equivalent of $250 million. During a private visit in Vatican City with Pope Leo XIII, she suggested to him that, after she joined the cloister, perhaps the Pope would start a congregation to serve Native American Missions. The pope answered with a question: “But why not be a missionary yourself, my child?”  Starting new things requires a passionate, visionary person.

In 1891 Katharine established the Sisters of the Blessed Sacrament, devoted to work among Native Americans and African Americans. It was an unpopular idea—the sisters encountered stiff opposition from the Ku Klux Klan, and all manner of racist and anti-Catholic persecution in the coming years. But St. Katharine persisted, heroically, using her powerful financial resources along the way to build institutions where her sisters would serve people who were outcasts of American society.

Prayer/reflection
St. Katharine, you show us the passion at the heart of Catholic mission. Through your example, and your prayers, help us to discover our passion for the mission of Christ, and to act on it!