“Love is the only language that everyone understands.” 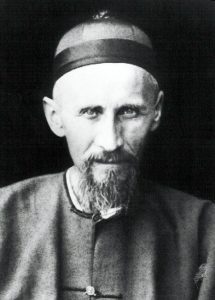 Joseph Freinademetz didn’t start as a missioner, but he dreamed of becoming one. He was born in an area of the Austrian empire, that is now northern Italy. He left for the seminary as a young man, and was ordained in 1875. The missions called to him during his early formation; not long after ordination he joined the Society of the Divine Word, across Europe, in the Netherlands.

Within a few years he and his friend Johann Baptist von Anzer were on a ship to Hong Kong. At that time the city was an important scene of evangelization. Joseph was assigned to be a catechist and trainer of priests. He learned Cantonese and Hakka dialects, wore Chinese clothing, and set about writing a Catechism in Chinese. He spent his 30-year career as a writer, teacher, pastor, and for a time, diocesan administrator in Hong Kong.  While tending the sick in a typhoid epidemic, he fell victim to the illness and died.

As a missioner, St. Joseph had left everything behind, going to a region of the world remote from his birthplace to live and preach the Gospel.

In spite of his many writings, he knew, as St. Thomas Aquinas before him, that actions would speak louder than words. “Love is the only language that everyone understands,” he was known to say. His life proved it.

St. Joseph, inspire us as we seek to break through the earthly things that divide us from one another. In your example help us to listen for and learn the language of others, so that we can hear with your ears, and speak your Word. Amen.