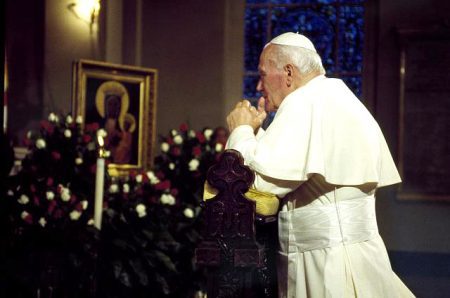 The future pope, born Karol Wojtyla of Krakow, Poland, lived as a young man in a Church suppressed by Nazi occupiers. At that time, he worked in a quarry, and then in a chemical factory, to avoid deportation. Called to the priesthood, he enrolled in an underground seminary, was secretly trained until World War II was over, then completed his priestly training. Living his faith under oppression colored everything that followed.

Eventually, this robust, theatrical, athletic seminary philosophy professor was named archbishop of Krakow, and was a father of the Second Vatican Council in the 1960s. He was elected pope in 1978, the first non-Italian in modern history.

As pope he wrote and taught extensively on life. He led the Church in the modern world as a defender of basic human dignity, from birth, through a just, non-oppressed life, to a natural death. He also gave 129 talks on what is now called Theology of the Body, a Catholic analysis on human sexuality.

He increased the worldwide presence of the Church, traveling to an unheard-of 129 countries during his papacy. In preparation for the celebration of 2,000 years of Christianity, he reached out and made amends to religious leaders worldwide. He spoke 12 languages.

Prayer:
St. John Paul II, inspire us to have a missioner’s spirit, like yours. Help us to know and feel the dignity of our own human life, and to protect the dignity of others, everywhere, from conception till natural death. Help us to share our faith, far and wide.