“We must adore Providence at all times.”

St. Francois was a Vincentian, the Order founded by St. Vincent de Paul. A gifted academic, he came into his own at the beginning of the French Revo 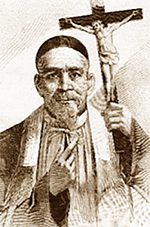 lution, a time and place very hostile to the Catholic Church. The Church there was seen as a refuge for the oppressive rich. Eventually he set out to be a missioner in China, where eventually martyrdom awaited him.

He went to China at age 44, and never did quite get a handle on the language. He wrote his brother that he wished he had come earlier, when his mind would have been more able to speak so differently than the Latin languages of Europe.

This Vincentian was a teacher; he ran a seminary in Kiang-si, China, below the radar of the Chinese government. Christianity was illegal then, and there were repeated persecutions. But the local leadership respected Francois greatly. He was a man of good humor and well rounded; a friend said of him “He has everything you could ask for: holiness, learning, health and charm.”

Overall, it is clear that he trusted deeply in Divine Providence. That trust allowed him to see the hand of God in all things, even in the persecution that led to his death.

This missioner suffered a violent end: he passed through 27 prisons, where he was beaten, tortured repeatedly along the way, forced to kneel in chains for hours. His spirit was unquenchable. He wrote letters from prison, including one in which he said, “We must adore Providence at all times.” Filthy, flea-infested and half-starved, he was tied to a crucifix and strangled to death.

Prayer: St. Francois, you show us that no situation is so bad that God is not with us. In your example, help us to be of good humor. Pray that we will continue to trust in Providence, no matter the hardship.