“Be who God meant you to be and you will set the world on fire.” 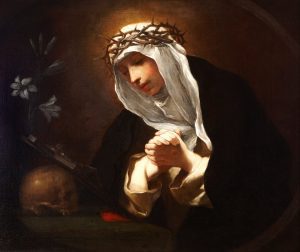 You might call her a missioner of peace. That’s one of the contributions she made to the Catholic Church, unraveling in controversy during her time. Even the pope had fled Rome, as an imposter pope took his place. Catherine is perhaps most famous for taking the long trip to Avignon, France, where the pope has established his new residence, and persuading him to return to Rome. She is less well known for the many missionary trips she took through Italy working to build unity in the Church.

Catherine was born in 1347, just at the arrival of bubonic plague (which would, over 200 years, kill at least 100 million people in Europe, about half the population). Her mother had 22 children, only half of whom lived. Catherine grew up to be joyous and independent. Unlike the typical woman of her day, she would neither marry nor join a convent, in spite of her father’s pleas otherwise. She instead became a lay Dominican, and stayed in her parents’ home, when she was home.

She is famed for a life of deep prayer and mystical experiences. Her times would call her forth, though, to fearlessly bear witness against corruption. What woman of her day would dare to challenge the pope to return to Rome and reclaim his rightful role? But her work began at home, in Siena, where she bravely challenged corruption and gained a following. She and her followers then traveled throughout northern and central Italy, advocating reform of the clergy—who had lost their moorings—and preaching to the people to repent and seek renewal through the “total love of God.”

It was that love that fueled a vision of true peace, a vision of rightness, for Catherine.

St. Catherine, you showed us that contemplation is the foundation of acting for the truth. Let your example empower us to pray deeply, and to take the fruits of our prayer into the world.