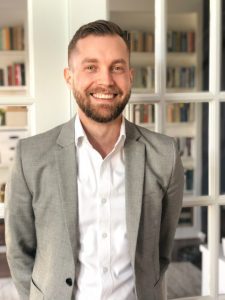 In May Glenmary hired Nathan Smith to be the director of Catholic-Evangelical Relations. The job is an important one in Glenmary, as fostering ecumenical ties with other Christian groups has long been a priority of the society. After all, Glenmary ministers in areas where Catholics are few.

Nathan fits his job well because he is an Evangelical and a Catholic.

“I never refer to myself as a convert,” says Nathan, a former Evangelical pastor. “I always say I’m an Evangelical who moved into communion with the Catholic Church.

“I don’t want anyone to have the idea that I’m moving away from the faith I was raised in,” he adds. “I’m only moving deeper into it.”

Nathan’s journey into communion took a turn in 2016. He had recently ceased working at an Evangelical church and started visiting a Catholic spiritual center in Cincinnati. He found a Jesuit spiritual director, and began exploring his faith in a new way. The real push came in 2019 after Nathan and his wife had several conversations about desiring to experience Christ in the Eucharist. In time, they were brought into the Catholic Church at St. Gertrude parish in Cincinnati.

Now Nathan is working with Glenmary to foster relations with Evangelicals, to reduce the separation between them and Catholics.

“I long for the Church of the future with the Catholic Church and the Evangelical communities coming back into communion,” Nathan said. “We’re not in a place that we have good relations yet on a denominational level, but I’ve been really encouraged by the number of pastors locally who are excited to talk to me.”

Because of the pandemic Nathan’s travel opportunities have been limited, but like others he’s been working digitally. He has had online meetings with Pentecostal groups interested in learning more and is hopeful the United States Conference of Catholic Bishops may help open an official dialogue. Nathan is also in the process of building a website and podcast to assist in Glenmary’s ecumenical mission.