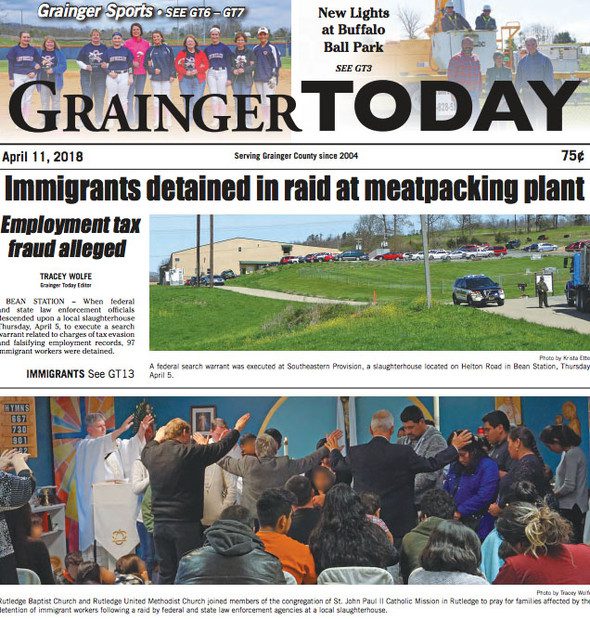 Glenmary Home Missioners president Father Daniel Dorsey commented on an immigration raid in Grainger County, Tennessee, after an investigative journalist, Jamie Satterfield of the Tennessee Lookout, recently alleged coverup on the part of Homeland Security agency ICE. The raid occurred at Southeastern Provision slaughter house near Bean Station, Tenn., in April 2018, allegedly to clamp down on tax evasion. Workers were rounded up and incarcerated. Some of those workers there have filed suit in federal court alleging civil-rights violations. They are being assisted by the Southern Poverty Law Center.

“These are real people,” commented Father Dorsey. “All of our missioners who have ever been in ministry have worked with people such as this, cried with them, witnessed the conditions in which they live, and in the words of Pope Francis, have encountered them. To be treated as though they are dangerous criminals is  just wrong and contrary to the Gospel of Jesus Christ.”

Glenmary Father Steve Pawelk was the pastor in nearby Rutledge, Tennessee, when the raid took place. “The reason for the raid was because two white men hadn’t paid their taxes. Yet they brought in two buses to take away the Latino workers, while Anglo workers walked free. It really is a racist story, and there is no other way to talk about it.”

Pawelk confirmed the investigative finding that the raid was unnecessarily rough: “There was a pregnant woman who was pushed onto the floor on her belly,” he recalls from an eyewitness. The Tennessee Lookout reported video evidence of “boot on the neck” holds similar to that used with George Floyd, the Minnesota man whose death while being arrested garnered national attention. Workers and their families took refuge at Glenmary’s St. John Paul II church in Rutledge as children were left without parents and other families scrambled to maintain safety.

“I respect the fact that people have different political opinions,” said Dorsey. “But human rights crosses the spectrum. Everyone has been created in the image and likeness of God and therefore must be treated with dignity.” To gain  a more in-depth understanding of the 2018 raid, Fr. Dorsey recommended the Netflix documentary, After the Raid, which chronicles  the raid’s immediate consequences. There are other stories about the raid at Glenmary.org.