The death of the forest is the end of our life. 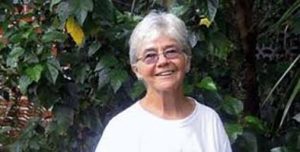 Sister Dorothy Stang was an Ohio missioner to Amazonian Brazil, who was murdered in 2005 for her standing up for the rights of poor people. These farmers were being pushed off their land in the Amazon forest by corporate interests. She’s not canonized yet, though she is revered in several parts of the world, and she has been officially recognized by the Church as a martyr. Pope Francis issued his synodal statement after the 2019 Synod on the Amazon on February 12, 2020, the 15th anniversary of her martyrdom.

Dorothy entered the Sisters of Notre Dame de Namur (SNDdeN) convent at age 18 and taught in elementary schools in her early years. Originally desiring to be a missioner to China, in the mid-1960s she followed the Church’s call to mission in South America, going to Brazil to work with other sisters. There she started as a teacher of catechists and other adults. She wound up spending her life over the next 40 years, serving the poor, the indigenous and landless people, and advocating for the protection of the Amazon rain forest. At the time of her death she was working with a government initiative to help develop farms on land granted to landless families. Ranchers, some corrupt, coveted that same land.

The details of her death are memorable. She, along with small farmers, had received death threats for years. She refused to return to the safety of the United States. When encountered by her assassins, they asked if she had a gun. She held up a Bible and, as she read aloud the Beatitudes, she was shot and killed.

During her life she had opened 39 schools in rural Brazil. She was posthumously rewarded the United Nations Prize in the Field of Human Rights, as well as numerous honorary degrees. She is the subject of books, films, even an opera in the years after her death.

Prayer: Sister Dorothy, you showed a passion for the dignity of God’s creation in the land and in everyone around you, including your persecutors. Inspire in us the commitment to love creation and to stand with the most vulnerable among us.