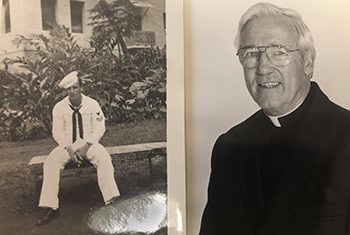 Father Frank Gardner, as a young man, left, and later as a priest.

In Glenmary’s 80 year history, 28 missioners were also veterans. Twenty-seven of those have gone on to their reward but Father Ed Gorny remains a senior member at Glenmary’s headquarters in Cincinnati, Ohio.

All veterans have stories from their service but perhaps the best known among Glenmarians are those of Father Frank Gardner, and Father Leo Schloemer.

Father Frank served in the Navy in the latter days of World War II and was eventually captured and became a prisoner of war. His detailed notes explain the treatment by his captors, including a time when he was regularly beaten.

“The club was about four feet long and two inches in diameter. … They would hit us with this club in the same fashion a baseball player would swing at a baseball.”

Father Frank and his companions were released at the end of the war, and he went on to become a long-serving Glenmarian. 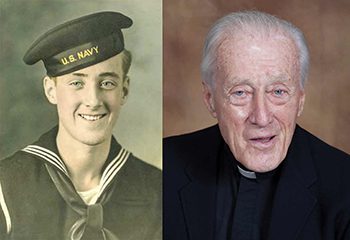 Father Leo Schloemer, left in his Navy blues, and later as a priest.

Father Leo also served during World War II. He served in the Navy, and in 1945, his ship, the destroyer USS Renshaw, was torpedoed, killing several shipmates. It was this moment that started him down the path of considering the priesthood.

“It makes you take stock of your life, of what’s important and what you want to do with your life. You consider a lot of things you’ve never really taken the time to before,” Father Leo said of the incident.

Glenmary thanks the 28 men of its own ranks, and the countless others, who have honorably served this country in the armed forces.