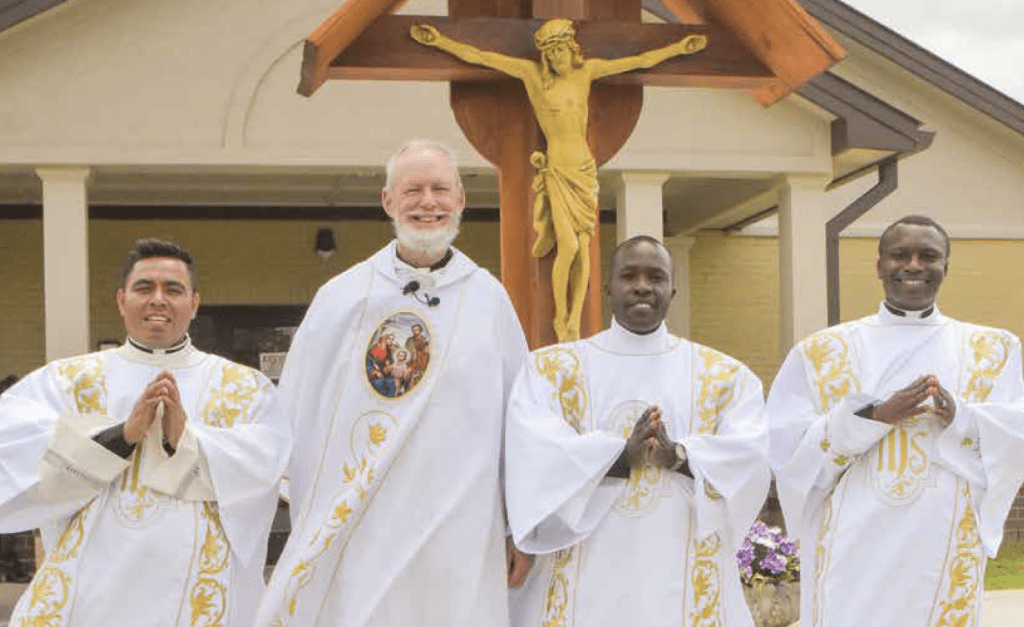 “Come, grow with us!” Those could be the words of welcome at Final Oaths liturgy and Ordination Mass this past June at Glenmary’s Holy Family Catholic Church in Lafayette, Tenn.

Normally a crowded, joyous event, this time it was limited by pandemic restrictions. But it was joyous nonetheless. Three men who have been in training for years were welcomed to promise a lifelong commitment to their fellow Glenmarians. The next day they were ordained to the diaconate, a year ahead of priestly ordination. The three are Samuel Mungai and Kenneth Wandera, both of Kenya, and José Carlos Miguel Lopez, the first Glenmarian of Hispanic origin. 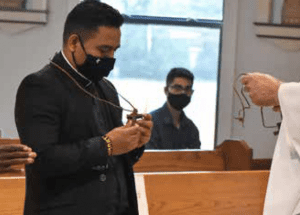 Jose Carlos, during his Final Oath ceremony, receives from Father Dan a home-made wooden cross. The simple cross helps the Glenmarians witness in areas where there are few Catholics.

“I’m making history in Glenmary!” says José Carlos, beaming. From a small town himself, in the state of Chiapas, Mexico, he is drawn to Glenmary’s small town ministry. The same could be said of Kenneth, who’s from a small town in western Kenya. Samuel is from Nakuru, the fourth largest city in Kenya.

For José Carlos, it was hearing of his own brother’s experience as an agricultural worker in rural Alabama that brought him to Glenmary. “When my brother told me about there being no Catholic Mass where he was, that kind of moved my heart,” he explains. When Glenmary Father Vic Subb came to visit Chiapas, José Carlos saw a way forward. “I said, well, if I’m a Glenmarian I can serve these small towns where people perhaps don’t speak any English.” Much like our German, Irish or Italian priests and brothers of yesteryear, his heart is moved by so many immigrants in need.

So Friday night, June 26, José Carlos, Samuel and Kenneth stood before Glenmary President Father Dan Dorsey in front of the altar at Holy Family, with Brother Larry Johnson as official witness. The three younger men have been in formation for years; now they take their oaths, before God and the Church: “I…do solemnly promise and swear before God to dedicate myself for my whole life to the missionary apostolate in the rural areas and small towns of the United States….” It is an awesome moment. 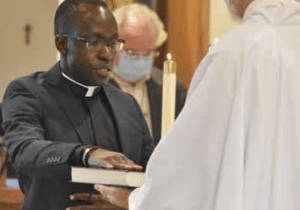 The next day is filled with joy of a different kind. The dream of sacramental ministry is what drives all three of these Glenmarians. Early in the morning you can hear a hum of activity around Holy Family. Into the night, down in the picnic shelter, parishioner Salvador Rodriguez and friends have been simmering a large pot of ribs for homemade barbecue. Soon-to-be-deacon Kenneth has been preparing goat meat, too, a Kenyan custom. Now, even as dawn yields to morning, Father Vic is arriving, then, one after the next, those to be ordained and those joining the celebration.

Due to COVID-19 restrictions, each of the men has been allowed to invite six friends, and, of Glenmarians, only those assigned to this mission are permitted to attend. Some of the 18 friends are parishioners; some are from out of town.

There are bustling, if quieter, preparations afoot, as Brother Larry tunes his guitar, and Holy Family’s Associate Pastor Father Charles Aketch reviews with the three to-be-ordained who will sit where and do what.

“The night before ordination I actually did not sleep at all!” Samuel says, after the ceremony. “I’ve never been so nervous. It was dawning on me, This is a very big commitment.” Actually he had slept a little, because he remembers dreaming about being late for ordination, he admits with a laugh.

The three men, in crisp clerical suits, stand, talking with Father Dan, who is no doubt calming them down a bit in his own light way. Then Bishop J. Mark Spalding arrives, and, before you know it, the three are at liturgy, lying prostrate as a sign of dying to themselves, listening to Father Dan announce their readiness, then kneeling before the bishop as he confers Holy Orders. 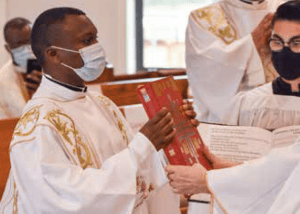 After his ordination, Samuel symbolically receives the Book of Gospels from Bishop J. Mark Spalding, who delcares, “Receive the Gospel of Christ, whose herald you have become.”

“I felt, Wow! Thank God!” says Deacon Samuel, after the liturgy. You can almost see on all three the weight lifted from their shoulders, and perhaps a beaming smile behind their COVID masks. Deacon Kenneth remembers, “I was wondering, Am I ready for this?” But now he can only say, “It was a moment of grace. Afterwards I felt a great peacefulness.”

Newly ordained Deacon José Carlos teamed up with Father Vic just after the Ordination Mass to give a blessing to a family who had asked (Deacon José Carlos’s six guests). His new job had started right away!

In the small reception, Bishop Spalding answers a few questions before stepping into the barbecue line. “Glenmary’s core is to reach to the margins and to bring Christ to others,” he says, a key emphasis of Pope Francis. For those reasons he is happy to drive up the road a bit from his See in Nashville. “I’m happy to have them here, and I want them to prosper ever more in the Lord.” He brags a bit about the qualities of Fathers Vic and Charles, and adds, “I hope that we’ll have other ordinations and celebrations for Glenmary here in the future. My arms are wide open and welcome.”

A few weeks later, Deacon Kenneth still will be glowing, but he’s busy, too. “I have a marriage case I’m working on, and a homily coming up. Tomorrow I will lead a Holy Hour via Facebook, and I have an online Bible study for parishioners coming up, and I’m leading a rosary on Wednesdays….” He looks forward to the day when he will preside at Eucharist.

Samuel, sporting his cowboy hat, is headed to the eastern North Carolina missions, where Father John Brown awaits. (He’s been a country music fan since childhood—Dolly Parton and Carrie Underwood are big in Kenya.) Ecumenism is on Deacon Samuel’s mind—he has already started building inroads into the local African-American churches. “I’ll be so joyful if I can find other churches where I can have Bible study….”

Deacon José Carlos will serve locals and a booming immigrant community, just as he dreamed he would when he came to Glenmary. He looks forward to the day when he will serve as an avenue of grace through the Sacrament of Penance and Reconciliation. “To know that that person is experiencing the mercy of God, through me, is one of my dreams of becoming a priest.”

Each of these men, now committed to Glenmary and soon to become priests, will be fulfilling dreams for a lot of people.

The Litany of the Saints is chanted by all as the three-to-be-ordained lie prostrate, dying to themselves and offering all for the service of the Church.

This story first appeared in the Autumn 2020 edition of Glenmary Challenge magazine.