Glenmary chose, from the beginning, not to apply for any of the US government’s Paycheck Protection Program funds. But the federal government also provided economic stimulus checks to most individual taxpayers. That included most Glenmarians.

“At Glenmary, we decided, with this windfall, to make sure that the funds went specifically to serving the poor and their needs at this moment,” says Brother David Henley, Director of Vocations. It was a moment inspired by the oath of poverty. Every Glenmarian who received a relief check contributed it to a common fund.

Local Glenmarians were encouraged to identify the greatest needs and use the funding to help address them. Glenmary’s administration helped to keep things coordinated, accountable and well documented.

“We try to live a simple lifestyle, in solidarity with the poor,” says Brother David. This fund was a way to keep to that oath of poverty each Glenmarian makes. 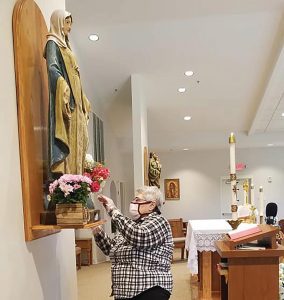 Marian devotion at Holy Family encourages care for the poor.

Like much of the country, Macon County, Tenn., was hit hard by the pandemic. Father Vic Subb, pastor at Glenmary’s Holy Family parish, was grateful to hear of the relief funds. He had started hearing about trouble early. “We’ve had a large group of people in the Hispanic community with COVID-19. Not surprisingly, some have been hospitalized,” reports Father Vic.

“One family has a little girl who has been hospitalized. Her parents can’t work, because if you live in a house with someone who’s positive, you can’t work. There’s a risk that there would be no money to pay for rent. I paid for their light bill, or they’d live in darkness.” With the fund, Father Vic helped them to stay afloat until Mom could return to work.

“We received $1,500 just the other day, and I was able to give out $300 yesterday to a family that has COVID, and then I gave out $300 to another family that has COVID.”  There has been a stream of need. The day after this interview, Holy Family hosted an ecumenical emergency food bank, hosted by parish volunteers. “We’re expecting 1,100 families to come!” he says, with a tone of urgency.

Filling in Some Gaps in South Georgia

“When the schools in Early County went virtual,” says Brother Jason Muhlenkamp, “people didn’t have devices or have the Wi-Fi to do it.” He’s talking of the families who live from month to month, struggling against a 29% poverty rate in this South Georgia county. “So we decided that we could partner with Family Connections in Early County schools to work together, to provide for them.” The pooled relief money from Glenmary, and another donor, allowed them to help fill that gap.

The parish also reached to find ways to get food to the families most in need. “We were getting calls for food,” he says, which meant that families, already living on less, were desperate. 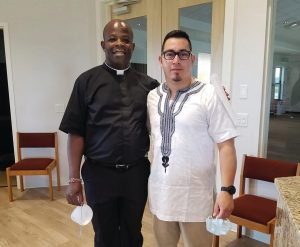 The Tavares family is an evangelization team that travels from parish to parish across Glenmary’s missions and beyond, reaching out to Hispanic families. The relief money from Glenmarians helped Marco Tavares to expand his local radio outreach.

“We bought an FM transmitter and microphone,” says Marcos, a seasoned radio catechist. “The FM transmitter is being used in the communities during our events. This way people can hear the preaching while they are in their cars,” he says.“That equipment will help us to deliver our ministry, regardless of the pandemic, keeping a safe environment in the parishes,” he says.

‘We’ve been able to do some good’

In Union County, home of St. John Paul II mission, food shortage is a common pandemic crisis. “Three times now we’ve gone out,” says Father Neil. “We bought more food and it’s distributed as people need it.” Working from the parking lot outside of the rented church is the safest way. “We set it up and announced it would be from one to four, and that we didn’t have that much. When I got to the church at 12:30 p.m., people were lined up in front, out in the cold. Pretty much all the food was gone by one o’clock—the time it was supposed to open up!” He has spent considerable fund money helping people with utility bills, too.