He charted the missioner’s course for our era. 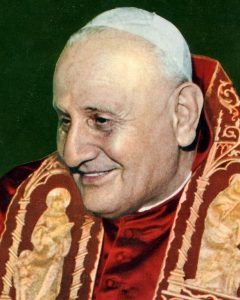 St. John XXIII will perhaps always be remembered for two things. First, he was a man of simple, rural origins. That experience of simplicity gave him a no-nonsense approach to everything that followed. Second, he completely changed the course of the Church of his time, through various teachings, but also by convoking the Second Vatican Council, where the world’s bishops opened the windows of the Church to engage with a world it had avoided for centuries.

“Good Pope John,” as he came to be known, was born to a tenant-farm family, the Roncallis, in a village in northern Italy, one of 13 children. He joined the seminary when he was 12, and, being relatively poor, received a scholarship to study in Rome. But he never forgot his humble origins—at the end he willed his entire fortune to his family: it amounted only to about $20 each. His priestly career belied that, as he was taken under the wings of influential bishops who found his straightforward personality refreshing. He wound up as pope.

His approach is best described in Vatican II’s missionary decree Ad Gentes, “To the Nations,” a teaching that guides missioners to this day. In it the world’s bishops say, “The pilgrim Church is missionary by her nature….It is plain that missionary activity wells up from the Church’s inner nature and spreads abroad her saving faith.” One of Ad Gentes’ many teachings is a strong link between evangelization and works of charity.

Prayer/reflection:
St. John XXIII, you showed us a simplicity of spirit, a broadness of heart, and the bravery to work humbly with others to change things that need change. Help us to see in your example a path for our own lives.