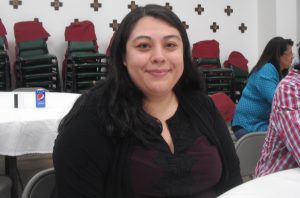 Like most of the Latino members of St. Michael the Archangel parish, the Glenmary mission in Erwin, Tenn., Mexican-born Maria Ramirez came to eastern Tennessee as the result of her father coming to the U.S. to harvest strawberries and tomatoes.

She describes St. Michael as being “a second home.”  Maria is one of the original 37 people who attended the parish’s organizational meeting in 2011.

In just eight short years, St. Michael has grown to become the largest faith community in Erwin.  Upwards of 75% of the church’s membership can trace family roots back to Mexico.  The families are young.  At a recent Confirmation Mass, the median age of those in attendance was younger than 30.

The 36-year-old Maria works full time in a medical office in Johnson City, Tenn., about a half hour from Erwin.  In addition to raising her three children, she attends night classes at a nearby college in preparation to become a nurse.

Maria’s story is not unusual.  Her father had worked in the fields as a migrant for five years before marrying Maria’s mom.  Her parents moved to Erwin from Guanajuato in central Mexico when she was only three.  There were only a handful of Mexicans in the area when her family arrived in the mid-1980s.

Since then, both her parents and she have become naturalized US citizens.  She and her husband are raising three teenagers, two girls and a boy.

Maria speaks of her aspirations for her family.  “My hope for them is to always be together so that no matter what life throws at them that they have friends they can rely on.”  Her goal is “that they can be whatever they want but that they always remain together.”

Maria is trying to raise the children bilingually, but finds that it’s hard to do because her children want to speak English like all of their friends at school.

St. Michael has opened the door for her teens to participate in diocesan youth programs, including the Search program where youth minister to youth.  In addition, there have been trips to regional conferences and to the National Catholic Youth Conference.

Far away from her ancestral home, Maria Ramirez has found her new home at St. Michael the Archangel, thanks to Glenmary.

Editor’s note: This story was written by Dale Hartnett, a story collector who travels to small town America, looking for interesting people who help make the world a better place. For the past eight years he has explored Appalachia interviewing the “Most Positive Person in Town.” He now writes stories of the people served by Glenmary’s missions across Appalachia and the South.